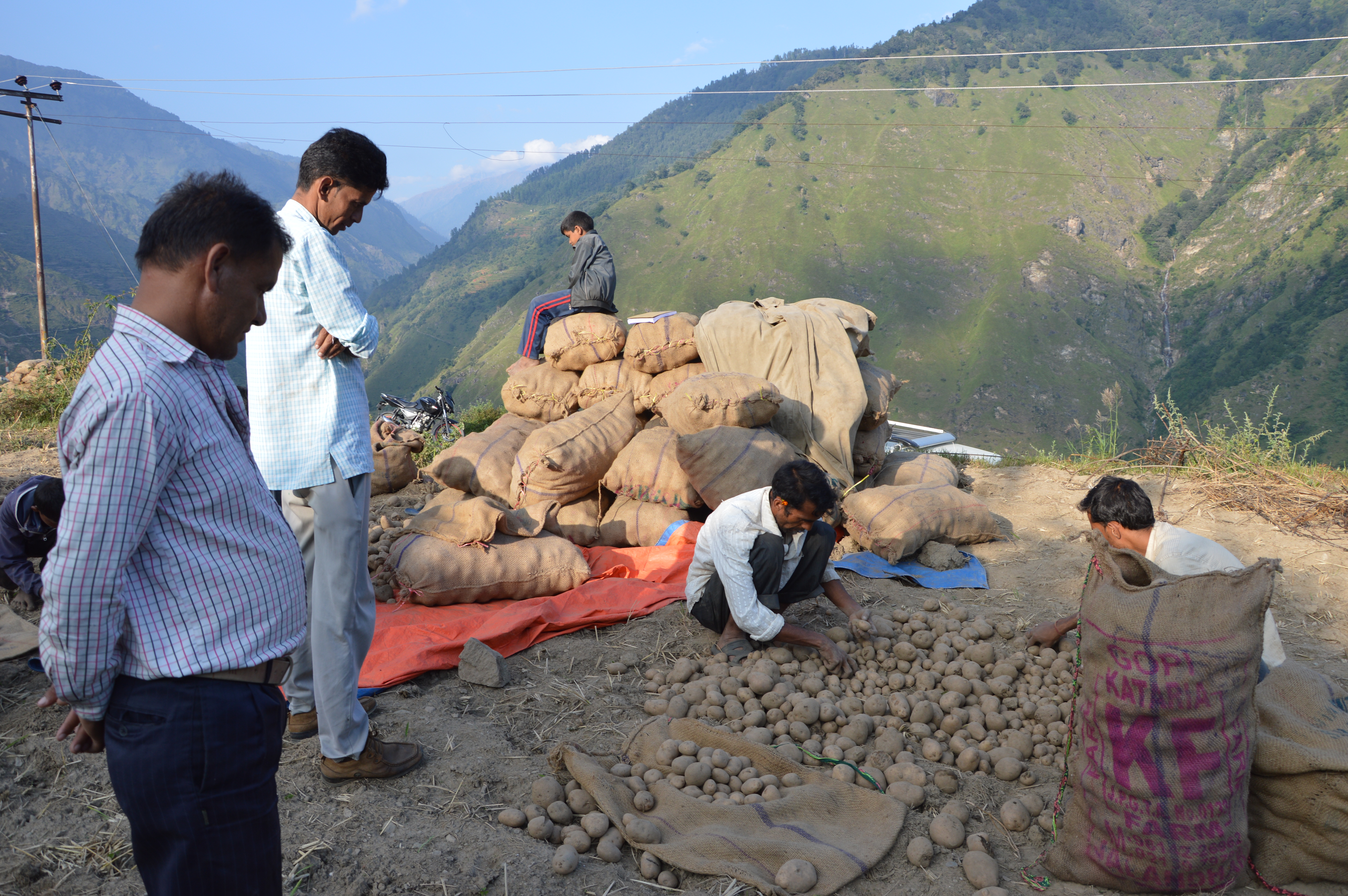 A small practice like grading and sorting at the farm level has resulted in farmers reaping rich benefits in Uttarakashi district. Besides value addition, collectivisation efforts  further enhanced the bargaining power of farmers.

Most of the rural population of Himalayan region depend on agro-based activities for their livelihood. Crops like paddy, soybean, millet, potato, wheat, green pea are predominant followed by millet and pulses. Uttarakhand has its unique geographical and climatic advantage for off-seasonal vegetables.

The Bhatwari block of Uttarkashi is a part of the Eco sensitive Zone which receives heavy rains every year.  Heavy rainfall and flash floods in June 2013 wreaked havoc, wiped out settlements and decimated lives.

Membership for VA is open to all the households who are residents
of the village. The VA is free to decide membership fees. Each
member household will contribute towards the decision making
process of the VA. Members receive social, financial and/or
technical support for the development activities planned as per the
resources available. They also have access to information on
weather, market intelligence, seeds, agronomic practices,
government schemes and technological advancements from VA,
thus working as a resource centre.

With an intention of transforming villages into self-reliant and sustainable ones, Reliance Foundation, in 2014, started working with the farming communities in 5 villages of Bhatwari region in Uttarkashi district, which is a most vulnerable region. The Foundation has been working with the farmers in Raithal, Natin, Dwari, Gorsali and Bandrani villages in Bhatwari block. The Foundation has mobilised farmers to get organised as Village Associations and empowered them to take up development initiatives.

Potato and pea are the major cash crops grown by farmers in Bhatwari block. Besides climatic challenges, farmers face hardships in marketing their produce. The major challenge of the existing marketing system is the high involvement of village agents/intermediaries at village level. Farmers sell their produce without grading and sorting. Also, farmers fear that if they graded the produce, the low quality produce would not get sold. Being a mountain area, it is difficult for farmers to transport the produce to markets. Owing to lack of transportation facility, lack of organized marketing system and lack of exposure to broader markets in Dehradun and Haridwar, farmers have been depending on agents and receiving low price for their produce.

To address the issue of marketing, Reliance Foundation designed an intervention to help farmers realise a fair price for their produce. This was to be achieved by building awareness and capacities on the importance of economies of scale, value addition, building market linkages, market information, all leading to realising the best value for the produce. The intervention was designed and executed through the Village Associations in the year of 2016-17.

Village Association members were first trained on best cultivation practices of potato and pea, to improve the crop yields. As quality and access to seed are important, Village Associations collectively procured the seeds and distributed to the members. The collective procurement was done at cluster level by all the VAs across project village’s viz. Raithal, Natin, Dwari, Gorsali and Bandrani.

The Village Association members involved the village agents/intermediaries in the General Body Meeting and discussed the challenges created by them and sought their cooperation in addressing the same. As most of the agents belonged to the same village, they agreed to cooperate with the Association.

The Village Association decided to collectivize farm produce. For this, the farmers estimated the harvesting time of Pea and Potato and the probable quantities that could be harvested, to plan the schedule of procurement and collective marketing. VA decided to sell the produce in Dehradun Mandi.

A Buyer and seller meet was organized at village level, where in Village Association representatives interacted with the buyers from Dehradun Mandi. For the first time at the village level, Mandi expert imparted training and handholding support to farmers in sorting and grading. Farmers were oriented on quality of produce, importance of grading and importance of collective marketing of produce.

For the first time at the producers level, potato grading was done across two villages. Village Associations provided gunny bags to potato and pea growers.  Four village associations viz  Pahi, Dwari, Gorsali and Raithal have taken initiative to provide packaging material for potato marketing. A total of 9600 gunny bags were procured from Dehradun market and distributed to members.

Farmers weighed the produce and filled only 50 kg each bag.  In the past each bag was considered as a standard weight of 50 kgs and was sold on the basis of bags without weighing being done. Now the trend has changed and Village Association deployed weighing machine and members sold their produce as per the actual quantity of produce.

Challan book was prepared to record the quantities of Potato and Pea. Three copies of challan were printed- first copy of challan given to farmers with the details of their quantity, the second one attached to the gunny bag for facilitating sale at the Mandi and the third copy maintained by Village Association.

The Village Association representatives booked transport for carrying the produce from village to Mandi. The cost of transportation was borne by all the producers whose produce is carried.  When the produce reached Dehradun Mandi, open boli (auction) was done in Mandi. The quantity sold and price realised is seen in Table 1.

All the transactions were made through Village Development Fund, which is solely being managed by the village associations. The money received was deposited to VA account. VA later organized a meeting in the village and distributed money to farmers as per the quantity and selling price, after deducting the transportation charges.

Total investment done was around Rs.129600 from Village Development Fund to procure packaging material (gunny bags). Due to this initiative, VAs earned around Rs.24,000 as profit and also saved around Rs. 38400 for their members. VAs developed contacts with 3 wholesalers at Dehradun Mandi for regular updation of Mandi rate and support for market linkage. This initiative not only saved the time of members but built the capacity to negotiate in larger markets.

A proper market linkage has been developed by adopting a value adding practice like grading and sorting. The collectivization of produce was strengthened through collective marketing by integrating producers, Village Association members, transporters, traders and village association members. The initiative facilitated in building capacity of producers on value addition, collective marketing, better negotiation skills, forward planning and logistics management.  Though this is a small step, hope it will help in bringing about a change in the market dynamics in coming years.