India is home to incredible diversity in plant and animal species and is ranked among the richest areas of biodiversity in the world. Unfortunately, much of this diversity is being eroded at an alarming rate, largely due to habitat destruction and invasion by alien species.

In the hilly regions of southern India, the native agro-biodiversity is being replaced by the cultivation of cash crops for generating farm income. In Kolli Hills (Tamil Nadu), over the last three decades, cassava has increasingly replaced native millets. A parallel shift has happened in Jeypore (Odisha), where eucalyptus is now occupying traditional agricultural landscapes, while banana is replacing paddy rice in Wayanad (Kerala). While enabling farmers to generate some income, increasing monoculture of market-driven cash crops resulting in loss of crop diversity is accelerating rates of soil erosion, promoting crop disease, while making farmers more vulnerable to climate risks. It is also reducing local food production, thereby increasing people’s dependence on food procured from outside the region, and on wheat and rice provided by public food distribution systems.

Roots and tubers, often neglected by agricultural extension systems, are traditional sources of food and income for small farmers in rural India. In Kolli Hills, however, cassava that constitutes 70% of crop production in the region, is grown solely for commercial purposes. Over 7,000 hectares of farmland is devoted to a single, non-edible variety (H165), as this is preferred by industry for its superior starch quality. Monocropping of a single cassava variety over such a large area has resulted in increased disease incidence and soil erosion, causing productivity loss. It has also displaced mixed farming systems and associated local crop diversity, negatively impacting on food security and climate resilience. In response, the MS Swaminathan Research Foundation (MSSRF) in collaboration with the University of Alberta – working through the Alleviating Poverty and Malnutrition in Agrobiodiversity Hotspots (APM) project – initiated participatory varietal selection (PVS) for cassava varieties, undertook intercropping trials with pulses and millets and organized high quality millet seed production through community seed banks.

Participatory research on cassava and elephant foot yam undertaken in Kolli Hills and Wayanad has resulted in farmers identifying better varieties that suit their requirements, including higher yields, higher starch content, enhanced drought tolerance and the ability to adapt to local conditions. Through intercropping, they have also been able to cultivate a diversity of short duration food crops alongside their main crop, boosting the nutritional content of household diets, earning extra income and strengthening the resilience of their farming systems against shocks, such as drought.

Selection trials were organized with the participation of men and women farmers to identify cassava varieties for starch, productivity and edibility, using 11 cassava varieties brought from the Central Tuber Crops Research Institute, Kerala. Farmers identified three cassava varieties (CMR 1, CMR 73 and Srirekha) which were comparable in yield to H165. All three varieties had higher starch content (27-29%) compared with H165 (24%), and one of the varieties, Srirekha, which was selected by female farmers, is edible. All three varieties are now being made available to farming families, and will add to cassava diversity in the region.

A farmer-driven intercropping approach using onions led to the production of 300 kg/acre of onions, resulting in a 60% increase in family income. Intercropping did not have adverse effects on cassava yield, as the millets, pulses and onions were harvested prior to cassava tuber development. Furthermore, the use of legumes contributed positively to soil health. Women and children benefited from intercropping through increased availability and consumption of diverse food crops like millets and pulses.

We were mono-cropping cassava for several years to earn income. The new way of intercropping helped us to harvest finger millet and later on black bean with the same or increased quantity of cassava. It gave us additional food for our family, rather than depending on the income from cassava to buy food, says Kalaiselvi, a 28 year old woman farmer from Tamarakulam.

Small and marginal farming communities in India often have limited access to quality seeds, due to weakened traditional seed systems and increased dependency on seed supplied through the state or commercial markets. The APM project supported the establishment of seed banks to provide quality rice and millet seeds of local and improved varieties offering high yields and desirable culinary properties. The seed banks are managed by farmers’ clubs or women’s self help groups; those borrowing seed are required to pay back double the quantity after the harvest, helping to make the seed banks sustainable. Community members also mastered skills for identifying superior varieties and producing quality seeds. Establishment of seed banks has led to the timely availability of quality seeds, increasing farmers’ options in seed choice, minimizing risk of crop failure and boosting crop productivity. The provision of new and improved varieties has also contributed positively to the diversity of cropping systems in these regions. By increasing agro-biodiversity and human capacity, these seed banks are contributing to long-term resilience and food security in these communities.

In Kerala, land-owning families allow landless women and marginal farmers to use their land for six months during the rice fallow (December-June) to grow yam or any short duration crop free of cost. This provides the land owners with residual benefits from applied fertilizer and crop residues, as well as from soil tillage, all of which boost their next paddy rice crop. The project facilitated landless women farm workers to gain access to such lands for the cultivation of elephant foot yam, using high quality seed, enabling them to earn income in the range of INR 3,000-13,000 (Indian rupees) in six months. They have also used the rice fallows to cultivate diverse vegetables, including cowpea, amaranthus, okra, maize, pumpkin and cucumber, for their own consumption. 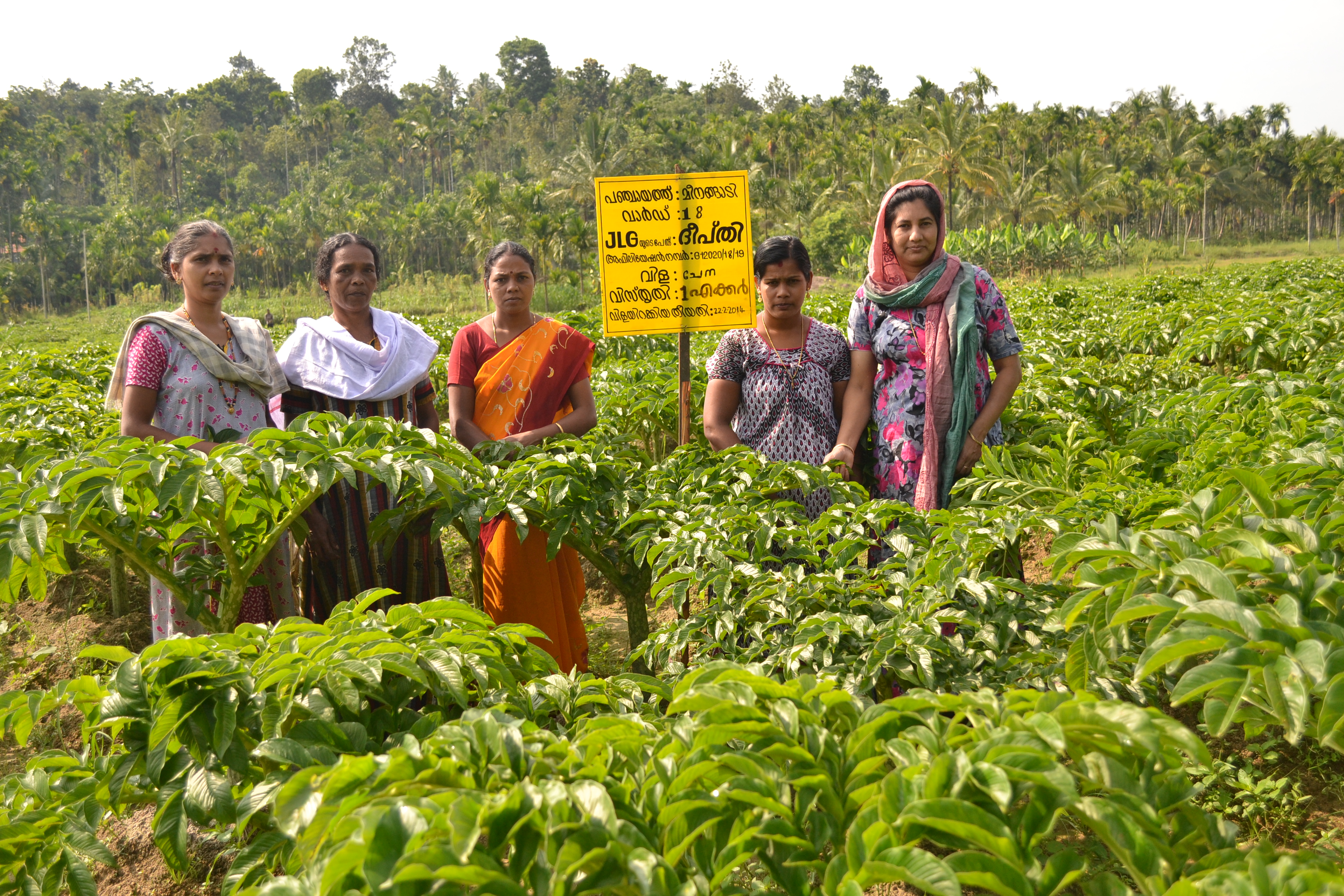 Through participatory research, farmers identified cassava and elephant foot yam varieties that offer more yield and income. They also learnt techniques of intercropping which have further increased crop diversity and increased the nutritional value of their food basket. Seed banks managed by farmers’ clubs and women’s self help groups have been instrumental in enhancing on-farm agro-biodiversity and reducing risk from drought for small and marginal farming families. Women farmers and landless collectives have benefited from improved farming practices and access to quality seeds, which have in turn opened up new and diverse livelihood options.

This is an edited version of the original article Integrated agriculture enhances farm productivity and livelihoods in agro-biodiversity hotspots, by the authors, published as one story in the series Stories of Change. The series reports on research supported by the Canadian International Food Security Research Fund (CIFSRF), a program of Canada’s International Development Research Centre (IDRC), undertaken with financial support from the Government of Canada, provided through Global Affairs Canada (GAC). Produced by WRENmedia in April 2014.