Non profits like Technoserve, through partnerships, are contributing towards empowering small farmers by connecting them to information and market opportunities. Through their initiative, small farmers in Bihar, as members of farmer producer groups, realised the power of negotiation through collective marketing. 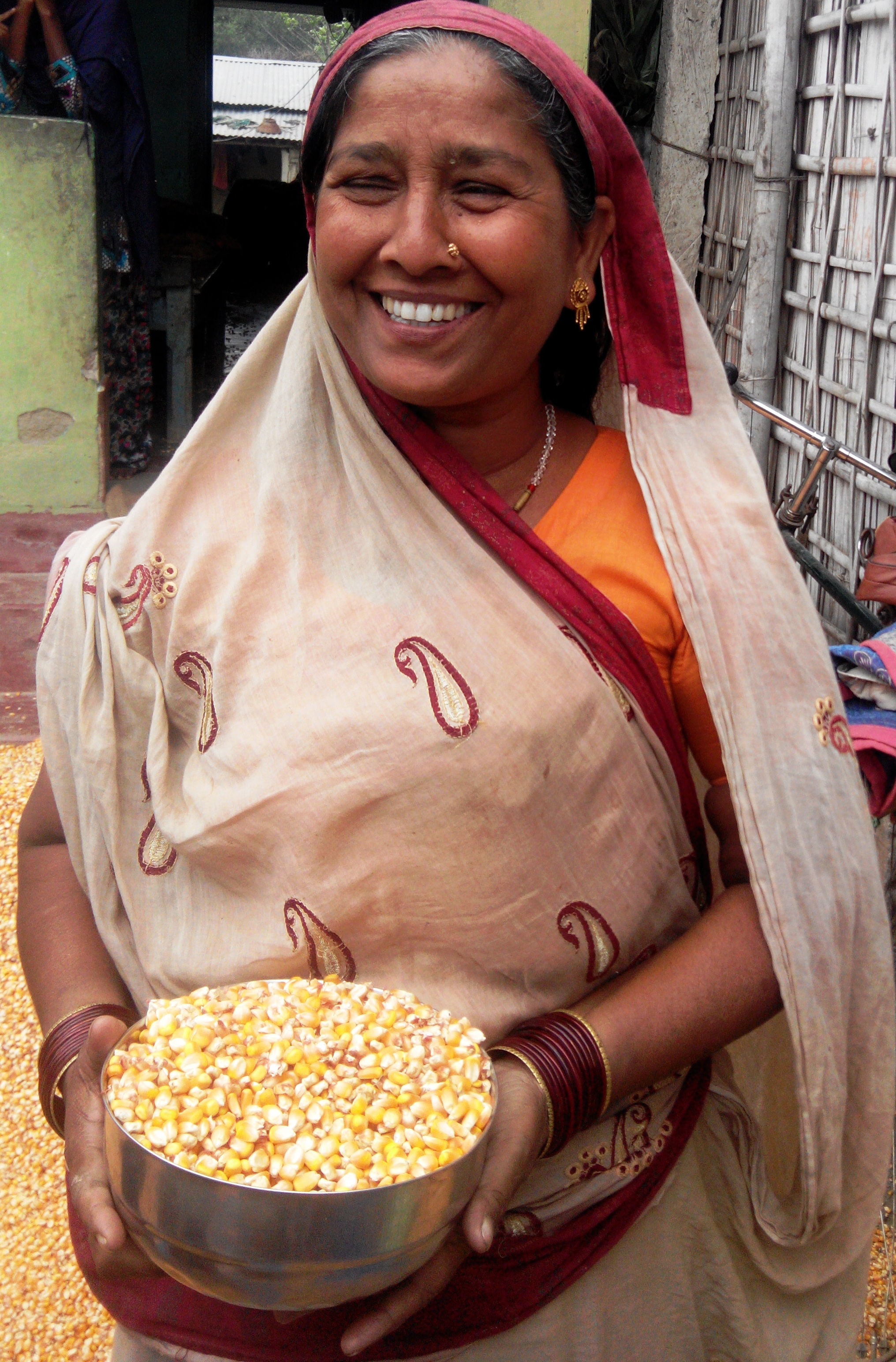 Purnia district located in the maize belt of Bihar, is known to have the highest productivity of rabi (winter crop) maize in the nation at 4 tons/ac. Maize is the primary cash crop for farmers in the district and most of them are small and marginal farmers with an average land holding of 1.39 acres. While the marketable surplus of these farmers is nearly 90%, they have limited access to mandis (large markets where farm produce is sold). In the absence of an alternative solution, they depend on multiple intermediaries for selling their produce.

The intermediary chain is very big and wide ranging from collection agents at the village level to brokers at each mandi to large traders who eventually sell the produce to institutional buyers across the country. Each intermediary charges a commission, reducing the final price that the farmer receives. In addition to this, collection agents in villages follow manual grading processes and are known for weighing malpractices that lead to significant losses (approximately Rs.60 – Rs.80 on each quintal of produce procured from farmers). Repealing of the Agricultural Produce Marketing Committee (APMC) Act has also worsened the market infrastructure and trading regulations. Price is now decided by a few big traders and grain quality is judged by its look and feel, without the use of moisture meters. This combination of an unorganised trade network consisting of multiple market intermediaries with weighing and grading malpractices significantly reduces the final price that the farmers receive for their produce.

Keeping in mind the above mentioned issues faced by small and marginal farmers in Bihar, JEEViKA, a World Bank supported program for poverty alleviation in rural Bihar, floated a producer company called Aryanyak Agri Producer Company Limited (AAPCL).   JEEViKA (which means livelihood in Sanskrit) is implemented by Bihar Rural Livelihoods Promotion Society (BRLPS), an independent society of the Government of Bihar. The organization has been designated as the State Rural Livelihoods Mission (SRLM) to rollout National Rural Livelihoods Mission in Bihar.

AAPCL was established in November, 2009 under the Companies (Amendment) Act 2002, with its registered office at district Purnia.   Initially, AAPCL had an authorized share capital of INR 5 lakhs and could issue 50,000 shares, each worth Rs. 10 to the small and marginal farmers, categorically the target families of JEEViKA. The shareholders belonged primarily to the Dhamdaha block of the district.

Even though AAPCL came into being in 2009, it was not active as most producer groups under it were defunct. A majority of the women producer groups in Bihar largely represent small and marginal farmers with little capacity to directly market their produce themselves or hold back the produce to gain lean season premium. The management of these producer groups lacks an understanding of the various marketing tools and does not have the skill to negotiate with buyers, leading to higher risks and losses. As a result of this, the members have never realised the potential of collective aggregation and marketing.

To address this need, JEEViKA, in partnership with TechnoServe India,.launched a technical assistance project in Bihar in December, 2014. TechnoServe is a different type of nonprofit, which helps the  poor people by connecting them to information and market opportunities. The objective of the project, funded by the Bill & Melinda Gates Foundation, was to build the capacity of the JEEViKA team on value chain development, organize women farmers in two target districts of Bihar into market oriented Farmer Producer Organizations, provide technical assistance to producer groups in Bihar and develop a multi-year roadmap to facilitate producer group formation and strengthen the broader producer group ecosystem in the state. To achieve these objectives, TechnoServe initiated a pilot in Purnia district to demonstrate higher price realization to farmers through collective aggregation and marketing of produce, reducing information asymmetry and reaching out to national buyers through commodity exchange platforms.

Based on an initial assessment of the producer groups in Purnia, their crop profile and existing post-harvest challenges faced, TechnoServe India recommended the AAPCL to adopt an aggregation and market linkage business model which eliminates multiple layers of intermediaries and thus ensures better price realization and also allows farmers to benefit from off season price increases. The project further recommended the producer company to sell their produce on an electronic trading platform to minimize risk.

Leveraging JEEViKA’s institutional mechanism, AAPCL raised approx. INR 60 lakhs working capital through internal sources – Producer Groups (gap funding) and Cluster Level Federations (loan @0.6% per month) to do maize procurement and marketing. AAPCL members were trained on the post-harvest practices of maize – standard weighing and grading practices (electronic weighing machines, digital moisture meters etc.) to ensure transparency during collection and sales. An electronic trading platform (NCDEX E Markets Ltd – NeML) was used to reach out to major buyers across India. Farmers’ produce was stored in NeML certified warehouses after quality checks and sold to institutional buyers in both the spot market (NeML) as well as futures markets (NCDEX) to maximize returns. With this process, the producer company became the first farmer producer company in India to be registered under the NCDEX platform for forward trading in maize.

In 2015, 300 women from AAPCL sold their maize online, and in 2016, this number went up to 818 women.   The main business figures of the producer company for the last two maize seasons are detailed in the table below.

In addition to the benefits mentioned above, the revival of the producer company made the members aware of how transparent the business should be, and they have thus started asking for better prices from the local collection agents. They are also pressurizing the agents to replace their uncalibrated manual weighing scales and hand based grading practices with industry standard equipment and practices. The use of an electronic trading platform helped the producer company to get connected with nationwide buyers while preventing the risk of delay in payment and any breach of contract by the buyers. Also, with the members receiving the payment for their produce within 3-5 days of sale, they have been able to ensure timely repayment of crop/ other loans.

The producer company sold maize under the brand name ‘JEEViKA Maize’ and has earned a lot of traction from the buyers because of the higher quality produce. The availability of moisture meter with every producer group helped the members to dry and clean the maize before sale, thus making it Grade A maize.

In addition to maize, in May 2016, JEEViKA, with TechnoServe’s support, initiated a pilot in Litchi and vegetables market linkage to cut out the middlemen and provide direct market access to the farmers.  To do this, the pilot aimed to strengthen Samarpan Jeevika Mahila Kisan Producer Company Limited (SJMKPCL), Muzaffarpur.

SJMKPCL has procured 6120 kgs of litchi as a pilot intervention in the 2016 season. Four thousand kilograms were sold on NeML to distant markets of Mumbai, Ahmedabad and Bangalore. The producer company earned INR 5.0 lakhs as net revenue from the litchi business with 8% net profit. Though the number of farmers who participated in the pilot was less, the spot purchase farmers earned an incremental price of 16% while contracted farmers realized better price and assured payment.

As for vegetable market linkage, 5 MT (~INR 1.5 lakhs) of vegetables were supplied by the farmers in Sakra block to Big Bazaar, an organised retail chain in one month (August, 2016).

“I will always sell my produce to the producer company from now on!”

Shakila Khatun is a native resident of Kukrun east village in Purnia district. She is 40 years old and stays in a joint family of 11 members. Having 8 acres of land, the family’s major income comes from agriculture. Maize is grown on 95% of the land, while wheat is grown for self-consumption. Rice is grown during kharif season, 50% of which is sold in the local market. Even after the cyclonic-wind in the month of May, her production of maize was 27.7 MT this year. Till last year, she used to sell her maize produce to Mr. Mustaq, a village-level-aggregator-cum-trader who picked the maize from her door-step and offered a price based on hand grading practices. Weighing was done on a handmade wooden weighing machine on which the adhatiyas (intermediaries) always take 7-8 Kg per quintal higher produce showing the reason as moisture loss. Like many others, Shakila doesn’t have a say to negotiate with Mr. Mustaq, as she has also taken a loan during the period of crop sowing.

During the first week of March 2015, Shakila participated in the Annapurna producer group meeting, of which she is a member, and came to know that the producer groups will procure maize and sell to AAPCL this season. She participated in all the meetings organised by JEEViKA and TechnoServe team, understood the procedure, and spread the information to all the members of the groups.

She took extra care on the post-harvest practices of maize suggested by the project team, and as a result 100% of her maize was sold as Grade-A produce to the producer group. She herself used the moisture meter to measure the moisture content of her grain. Accurate weight of the produce was measured through the electronic weighing scale and payment was credited directly to her bank account within 3 days of procurement. Such level of transparency convinced her to sell 100% of her produce to the producer group. She earned an average price of INR 1003 per quintal, 6% higher than what she would have got had she sold her produce to Mr. Mustaq. Being a shareholder of the producer company, she will also receive patronage bonus if the company makes enough profit at the end of the financial year, taking her increased price realization to 11.3%.

“This is the first time in my life that I’ve seen someone procure maize from a farmer’s doorstep with such transparent procedure. Not only me, but all didis (producer group members) will sell maize to the producer company from now on.”

Moving forward, AAPCL will focus not only on maize but also other commodities like potato and banana. SJMKPCL, on the other hand, will try to expand its business in the litchi and vegetables value chain, and will also get into pulses. Both companies plan to undertake input (fertiliser) supply business as there is a great demand from the members for the same. AAPCL aims to expand its shareholder base to 10,000 farmers in the next 3 years and plans to reach a turnover of 100 crore.

All the producer company members have acknowledged the power of negotiation through collective marketing. They feel proud to be a part of a producer company and have already started making plans for its expansion.