Recognising the need for enhancing information exchange as a means to improving LEISA basket of options for practitioners, AME and LEISA India consortium partners are working together with ILEIA through LEISA India initiative. For more than two decades, the LEISA magazine has been recognised as one of the primary sources of inspiration and to an extent practical knowledge on ecological agriculture by many individuals and agencies involved in development sector as well as mainstream research and training.

LEISA magazine published by ILEIA, the Netherlands, is being subscribed by around 45000 and expectedly reaching around 2.5 lakh people across the globe (www.ileia.org). Together with ILEIA, AME nurtured interest in sustainable agriculture in South India. Since 1997, they have collaborated in participatory research and distribution of ILEIA newsletter in India. Subsequently, since the year 2000, AME started the production of LEISA India edition in English, with an Indian focus and an international perspective. Presently, five translated editions in five languages are also being published – Hindi, Tamil, Kannada (2009 onwards), Telugu and Oriya (2011 onwards). While the English edition reaches the English literate target groups in India and a few south Asian countries, the language editions outreach is limited to the target groups in Karnataka, Andhra Pradesh, Tamil Nadu, Orissa, Uttarakhand and a few Hindi speaking States in the North India. The programme was supported by ILEIA from 2000-2010 and also by MISEREOR from 2011 onwards.

LEISA India magazine, which started as an Indian edition in 2000 with a readership of around 800, is presently being received by around 14000 readers. While the print and the digital editions of the English magazine reaches around 7000 readers, the five regional language editions reach another 7000 readers. The readers include academics, researchers, farmers, NGOs, government departments, banks etc. 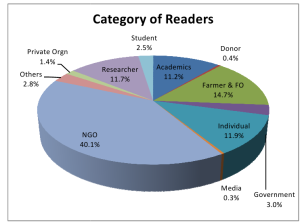 Besides, publishing the magazine, AME Foundation in collaboration with ILEIA, has forged a consortium of partners – LEISA India Consortium, to promote enhanced sharing of LEISA experiences.  The consortium of willing partners involving large networks of NGOs like MYRADA, GEAG, and LEISA Network, have been involved in promoting LEISA concepts and approaches by bringing about changes at the field level through participatory processes. They also have been documenting and sharing their experiences through various mechanisms and modes.

The partners have been involved in a focused two year documentation and communication programme (2003-05). The programme resulted in enhancing organizational capacities on documentation and sharing, both within the organisations, as well as in the public domain.

Presently, the language editions are being brought out in collaboration with the consortium partners which now also includes organisations like Action Fraterna (RDT), Anantapur and ORRISSA, Bhubaneswar.

Given the proportion of farming population in India, the diverse languages and the number of institutions involved in agriculture development, there is a need for intensifying efforts for scaling up dissemination and use of LEISA knowledge. One of the efforts includes building LEISA Alliances, an unstructured group of LEISA enthusiasts, for enhanced adoption of LEISA approaches and intensified sharing of experiences.