LEISA INDIA > Uncategorized > In the news

The 5th edition of the 10-day “Women of India National Organic Festival 2018” organised by the Ministry of Women & Child Development culminated on the night of Sunday, 4th November, at the expansive grounds of Indira Gandhi National Centre for the Arts, Janpath Road. Over the 10 days, women farmers and entrepreneurs from across the country, participated with vast variety of organic products ranging from food and fabrics to wellness and personal care participated in this festival, which is an annual affair.

This year, the total sales by the women farmers and entrepreneurs who came from 26 States, was a record of over Rs. 2.75 crore, up from Rs. 1.84 crore in last year’s edition that was organised at Dilli Haat, INA, New Delhi. The festival is expected to have had footfalls of nearly 12 lakh. The success of the Organic Festival has added to the joy of the women farmers from diverse as well as far off corners of the country, such as Majuli, Kangra, Leh, Palakkad, Chikkmaglur, Yavatmal, Dimapur and Almora, among others. This year saw the grand debut of the Food Court and Vegan Food, which were very well received by all visitors. 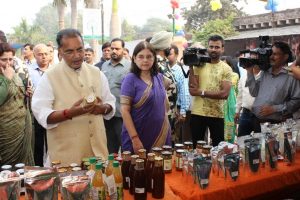 The Festival, which was held from 26th October to 4th November, saw a regular stream of people from diverse walks of life on all days, giving immense encouragement to the earnest efforts of all the participants. The main objective of the Festival has always been to support and encourage women and women-led groups that promote organic farming, thus supporting their local community’s economy, creating jobs and keeping farmers thriving, in addition to spreading proper awareness about the benefits of organic products.

The participants of Women of India National Organic Festival 2018 also had the opportunity to enroll themselves in Mahila-E-Haat, which is an online marketing portal set up by the Ministry of Women & Child Development, to meet the aspirations and needs of women entrepreneurs. This unique e-platform exponentially strengthens the socio-economic empowerment of women beyond the Festival. The Women of India National Organic Festival is an annual affair and serves as a platform to celebrate and promote women farmers and entrepreneurs from different corners of India.

For more information go to http://pib.nic.in/newsite/PrintRelease.aspx?relid=184613

IIT-H researchers have developed a nano-sized paper that gives an accurate reading of the acidity in milk by changing colour. The simple test is a big step in the quest to develop smartphone based sensors to detect adulteration in milk, say the team from the Indian Institute of Technology, Hyderabad (IIT-H).

The nano-sized (as thin as human hair) indicator paper is a chip based detector system. It is made of fibres of nylon loaded with a combination of three types of dyes. Called halochromatic, it is designed to change colour with the acidity of milk.Supplementing this, the team also developed algorithms that can be incorporated on to a mobile phone to accurately detect and interpret the colour change.

The research has been done by a team led by Shiv Govind Singh, Department of Electrical Engineering, with Soumya Jana and Siva Rama Krishna Vanjari and others. It has been published in the November 2018 issue of Food Analytical Methods journal.

Adulteration of milk is a serious problem in India. A recent report by the Animal Welfare Board shows that 68.7 per cent of milk and milk by-products in the country are adulterated with products such as detergent, glucose, urea, caustic soda, white paint and oil. Chemicals such as formalin, hydrogen peroxide, boric acid and antibiotics could also be added to milk to increase shelf life.

For more information, go to https://www.thehindubusinessline.com/economy/agri-business/simple-test-to-detect-adulteration-in-milk-devised/article25555598.ece

Sikkim beat 51 nominated policies from 25 different countries of the world to win the Future Policy Award 2018, which is also known as the “Oscar for best policies”. 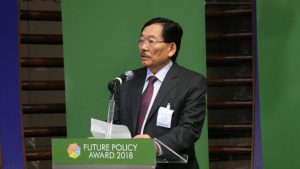 When it comes to sustainable food practices in India, Sikkim has been leading the way in the subcontinent, for years now. Finally, the United Nations has taken cognisance of the state’s efforts towards making sustainable practices mainstream. The northeast Indian state just received an award from the Food and Agriculture Organisation, for the world’s best policies promoting “agroecological and sustainable food systems”. Sikkim beat 51 nominated policies from 25 different countries of the world to win the Future Policy Award 2018. The Chief Minister of Sikkim Pawan Kumar Chamling received the award from the Deputy Director of UN’s FAO Maria Helena Semedo in Rome.

The award is nicknamed the “Oscar for best policies” and is co-organised with the FAO by The World Future Council (WFC) and IFOAM – Organics International. Semeda was all praise for Sikkim during the award presentation on Monday and said, “Sikkim is an outstanding example on how to successfully transform the food system and ensure respect for people and planet”. The award recognised the state’s leadership and political will to lead by example. She added that Sikkim’s transition to a fully organic state “has benefited over 66,000 family farmers, reaching beyond just organic production to include socioeconomic aspects such as consumption and market expansion, rural development and sustainable tourism with its comprehensive and inclusive approach”.

The award is in recognition of the policies adopted by the state government, starting with a political commitment to organic farming, way back in 2003. The state then devised the 2010 Sikkim Organic Mission and a strong commitment of the government, lead to the state becoming fully organic in 2016. Several other Indian states, including Kerala and others in the northeast of India are trying to follow in the example of Sikkim.

For more information, go to https://www.ndtv.com/food/sikkim-wins-un-award-for-becoming-worlds-first-organic-state-1932862

The formulation, prepared in buttermilk, was tested against the plant virus and found effective. Many milk proteins are known to have shown antiviral activity, by inhibiting reverse transcriptase enzyme of viruses. In the new study too, buttermilk base alone could reduce virus concentration but was more effective when used in combination with Bacillus formulations.

TSV causes cotton necrosis disease and is a major problem for cotton farmers. Farmers are generally unaware of the symptoms and end up applying insecticides indiscriminately to control the vector. Scientists have, therefore, been looking for an eco-friendly management method.

A few studies have reported the possibility of antiviral activity of bacteria against cotton leaf curl, cucumber mosaic virus and tobacco mosaic virus. Taking the cue, researchers collected rhizospheric and endophytic bacteria from both healthy as well as infected cotton plants. They cultured the bacteria and assessed their antiviral efficiency. They found that a rhizobacterium called Bacillus amyloliquefaciens was showing promising results.

Experiments were conducted during 2015 and 2016 in two different locations in Tamil Nadu to assess the efficacy of Bacillus species and phyto-antiviral principles against TSV infecting cotton. A high yielding hybrid, RCH659 was selected for the study. Buttermilk was used as a carrier base for application of bacterial inoculation. It was found to effectively colonize rhizosphere and phylloplane of cotton plant and produce anti-microbial peptides and fatty acids, which curbed the virus.

For more information go to: https://www.downtoearth.org.in/news/science-technology/buttermilk-based-bioformulation-helps-in-cotton-disease-control-62258