Holland is famous for its polders, or reclaimed land below sea level. The shaping of the Dutch landscape goes back to the 12th century, when rising water levels threatened agricultural land. 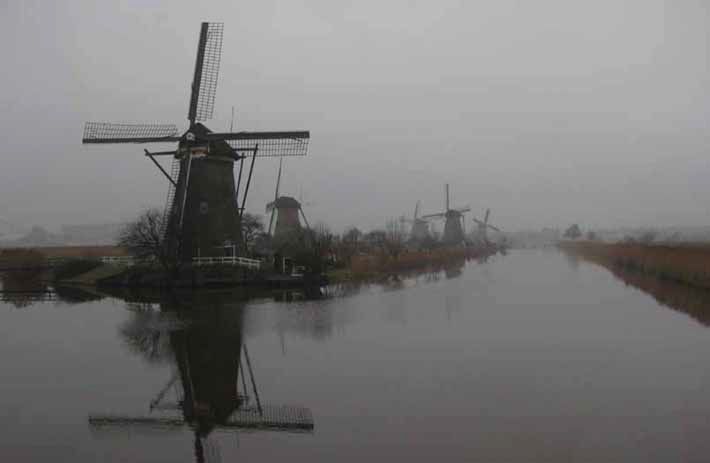 In response, farmers formed water committees that constructed channels, dykes and windmills to keep land arable and inhabitable. Even though the Netherlands is now an industrialised country, society is firmly built on the traditional water governance practices.

The Netherlands is a country shaped by the Rhine and other rivers flowing into the North Sea. A thousand years ago this area consisted of swampy lakes with an occasional dune or sand bank. People settled on the sandy land, and drained the swamps so that they could grow crops. But water was a permanent threat, both from the rivers and from the sea. As a response, farmers formed water committees to put up small dykes. This worked out well for a century or so, but as soil levels lowered further (peaty soils compress easily when dry), these small committees could not manage the threats anymore.

In the 13th century, Count Floris the Fifth ordered the building of larger dykes – along with strict rules to keep people responsible for their maintenance. At the time, windmill technology for grinding flour had already been developed. This technology was modified so as to use wind power for pumping water, allowing larger stretches of land to remain dry and arable. This is how the large, flat polder landscape with an occasional windmill was formed – which you can still see in Holland.

Many of the features of the modern industrialised state of the Netherlands can be traced back to these early farmers’ innovations. One of these, for example, is the milk value chain. Farmers noticed long ago that the peaty wet soil was not fit for crops but good for cows, and started to produce milk for the nearby cities of Amsterdam or Utrecht. They figured out that you could prepare cheese with the help of fluid from the cow’s stomach, and keep the nutritional value of milk for much longer. The process first took place on individual farms, but more than one hundred years ago the first co-operatives took over the processing of milk and the production of all sorts of cheese.

Now, cheese manufacturing in the Netherlands is one of the richest aspects of the country’s food culture. Every town has a weekly market with cheese stalls, and supermarkets sell more than a hundred different kinds of milk products, with new kinds of cheese being developed every year. The dairy sector today has an annual turnover of almost a billion euros, employs more than 60,000 people, and sells its products all over the world.

The early water control committees became permanent water boards, with responsibility for keeping the land free from flooding. The water boards are the oldest form of governance in the Netherlands, and compromise all the institutions that have an interest in maintaining the water level. Low water tables are good for grass, and thus for farm production. But they also cause the oxidation of peat, causing it to compress and thus lowering the soil surface.

High water tables are good for minimising this and also for biodiversity, as most wild field species are water-loving. The water boards weigh these interests and regulate water tables accordingly. They have helped develop a large-scale market driven agriculture, as well as a small-scale multi-functional agriculture with diverse economic activities.

Water boards were organised in a similar way to many water user committees in Asia today: richer farmers took the lead in setting up and maintaining the necessary water regulation infrastructure. Since their establishment, these boards have been handed to the local population – in clear contrast to the country’s political structure. While they are still functioning, they often clash with the local governance structures (such as municipalities). 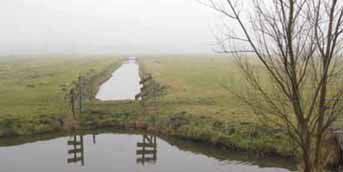 The Dutch approach to managing water shows that traditional governance structures can be vibrant drivers of technological and institutional development – if they adapt to new circumstances. In much of Africa, traditional chiefs continue playing an important role, even when ministries and local governments have taken over power. Is it possible that traditional chiefs play a role in the development of the farming sector in Africa? In many cases they already do.

Chiefs can develop constructive working relations with locally elected governance bodies and develop accountability to their people. For some tasks, traditional forms of governance are better equipped than elected governments, as in principle they can serve the interests of all people – men, women, rich and poor – in the area under their authority. The history of the Dutch water boards shows that this is a real possibility.