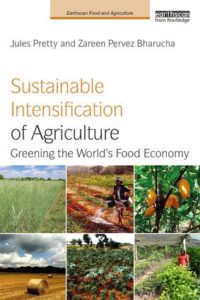 Sustainable intensification (SI) has emerged in recent years as a powerful new conceptualisation of agricultural sustainability and has been widely adopted in policy circles and debates. It is defined as a process or system where yields are increased without adverse environmental impact and without the cultivation of more land.

Co-written by Jules Pretty,  this book sets out current thinking and debates around sustainable agriculture and intensification. It recognises that world population is increasing rapidly, so that yields must increase on finite land and other resources to maintain food security. It provides the first widely accessible overview of the concept of SI as an innovative approach to agriculture and as a key element in the transition to a green economy. It presents evidence from around the world to show how various innovations are improving yields, resilience and farm incomes, particularly for ‘resource constrained’ smallholders in developing countries, but also in the developed world.

The Development Trap, How Thinking Big Fails the Poor 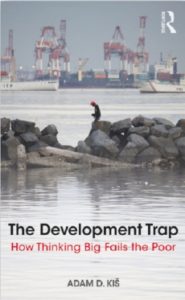 Poverty is an entrenched, intractable problem that will never be entirely eradicated. However, if we reorientate our objectives in line with realistic goals that improve the way that poverty is confronted on a smaller scale, we can still continue the fight for meaningful change.

Using rigorous scholarship illustrated with vivid storytelling and personal anecdotes from fighting against poverty in the field, The Development Trap argues that we need to make progress against poverty on the micro, rather than the macro scale. Instead of shooting for a single overarching end of poverty, our goals must be modest and reachable. Poverty still won’t go away, on a macro scale, but it can go away for specific individuals – in fact, it already happens all the time.

The Development Trap is a compelling account of the challenges of eradicating poverty, and the possibilities for meaningful change at a smaller scale. It will be perfect for international development professionals, students and scholars, and for those with a general interest in the future of aid and development. 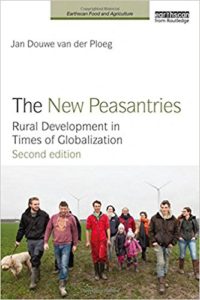 When first published in 2008, The New Peasantries revolutionized our ways of thinking of what constitutes the peasantry and repeasantization. It showed how a new era of empire and globalization was creating new forms of peasantry.

This new edition is thoroughly revised, with a reorganization of chapters and several new chapters added. It includes a new chapter on China, based on the author’s extensive fieldwork there, and much more information on Brazil. It integrates and critically reviews the many publications on peasants, peasantries and peasant modes of agricultural production published in recent years. It combines and integrates different bodies of literature: the rich traditions of peasant studies, development and rural sociology, neo-institutional economics and debates on empire and globalization.

The original book has been used in several international postgraduate courses. The experience and feedback thus obtained has been used to simplify the structure of the book and make it more accessible as a textbook for students.