Pradeep Kumar is the Head master of a middle school in Guhalpur, a small village in Digapahandi block in Ganjam district in Orissa, since 16 years. Pradeep belongs to a farming family in Bhimapur and started his career as a development professional in an NGO called Gram Vikas. Pradeep with a deep commitment towards development, has been instrumental in bringing about a change in mindsets and fostering action, among the farmers and the students alike.

Pradeep Kumar having worked with rice farmers during his association with GramVikas, was aware of the problems in rice cultivation, which was primarily salinity in irrigated water. In 2000, he happened to read the article by Dr. Norman Uphoff in the December issue of 2000, in LEISA India. Excited about the idea, he shared it among his farmer friends in Guhalpur to try out SRI in their farms. Two farmers experimented with the idea and got good results.

In 2000-01, to facilitate fair distribution of water for irrigation for the rice farmers from Ghodohada dam, Pradeep motivated farmers to get organised into water groups called Pani Panchayat.  Around 57 villages in the Digapahandi block were part of this group, with two representatives from each village. This group met once every month and discussed issues related to agriculture and also those related to overall village development. Many of the village level disputes were settled during the group meeting. Also being a farmer, Pradeep was a part of the group and played an influential role in the group. He being an educated person and the teacher, the local community has great respect for him.

In one of the meetings, Pradeep shared about SRI and how it helps in reducing resource use while enhancing yields. More importantly, as the main purpose of the water users group was to use water more efficiently, he stressed on the less water requirement for SRI, as a means to motivate farmers to adopt SRI. Around 200 farmers took up SRI initially. By 2003, around 1000 farmers in the block started adopting SRI on their farms.

Till 2005, SRI promotion was not on the agenda of the State department. There was no government support for SRI promotion and only few NGOs in the district like LIPICA and Gram Vikas were motivating farmers to adopt. Pradeep also organized a couple of meetings in his school by inviting resources persons from the Rice Research Institute in Cuttack. Around 50 farmers participated. However, this could not be continued for long.

From 2005 onwards, his focus was on upscaling the initiative. Follow up was made during the monthly and bi-monthly meetings of the Pani panchayat at the block level. Success achieved, problems faced were all discussed at the meetings. The knowledge and skills that need to be upgraded were also identified. But unfortunately, the communities had no means of fulfilling this desire. The staff from agriculture department visited only when there was pressure from the members, but hardly advised on better practices in farming.

Presently, SRI is being promoted by the Department of Agriculture and is a State level initiative. Pradeep was instrumental in motivating farmers to adopt SRI in Digapahandi block, much before the State started promoting it. The government run training programmes on SRI are not adequate, feels Pradeep. The programme took off slowly as farmers were slow to get convinced. After a number of exposure trips, farmers started adopting SRI. Pradeep interacted with SRI farmers in about 20 villages. Farmers expressed improvement in yields. Some got 20-25 quintals per acre while they were getting only 15-16 q/ac., earlier. Farmers found this method innovative and resource saving but were not sure whether they could follow on a large scale.

Pradeep has been instrumental in starting a kitchen garden in the school. The kitchen garden was started as a part of creating an activity based learning environment. Since most of the students come from poor farming families, children have a natural interest towards gardening. The kitchen garden is about 200 sq.mts. A number of vegetables like brinjal, drumstick, chillies, green leaves, papaya etc., are grown in the garden.

Pradeep with his awareness on ecofriendly cultivation has been promoting organic ways of cultivating these vegetables. A pit is made in the garden where compost is prepared using waste materials from the garden. Cowdung, neem leaves, deodar leaves etc are used for composting. Also has experimented with vermicomposting after reading about it in the magazine, but could not achieve great success.

In the beginning, the plants were affected by white ants and occasionally some diseases. “Dr. Narayana Reddy’s column (a special column in LEISA India by an organic farmer) helped us a lot in addressing these problems” says Pradeep. He further added that green manuring was resorted to and constant care and observation helped tide over many problems. He had also tried applying night soil to marigold plants based on Narayana Reddy’s experience.

Children have a special sharing class for an hour on every Saturday. The students are organized into ecoclubs in which they are exposed to environmental issues. Children share what they have been doing and also the problems in maintaining the kitchen gardens. The teachers advise them on necessary follow up action. No special training is imparted to children on kitchen gardening. 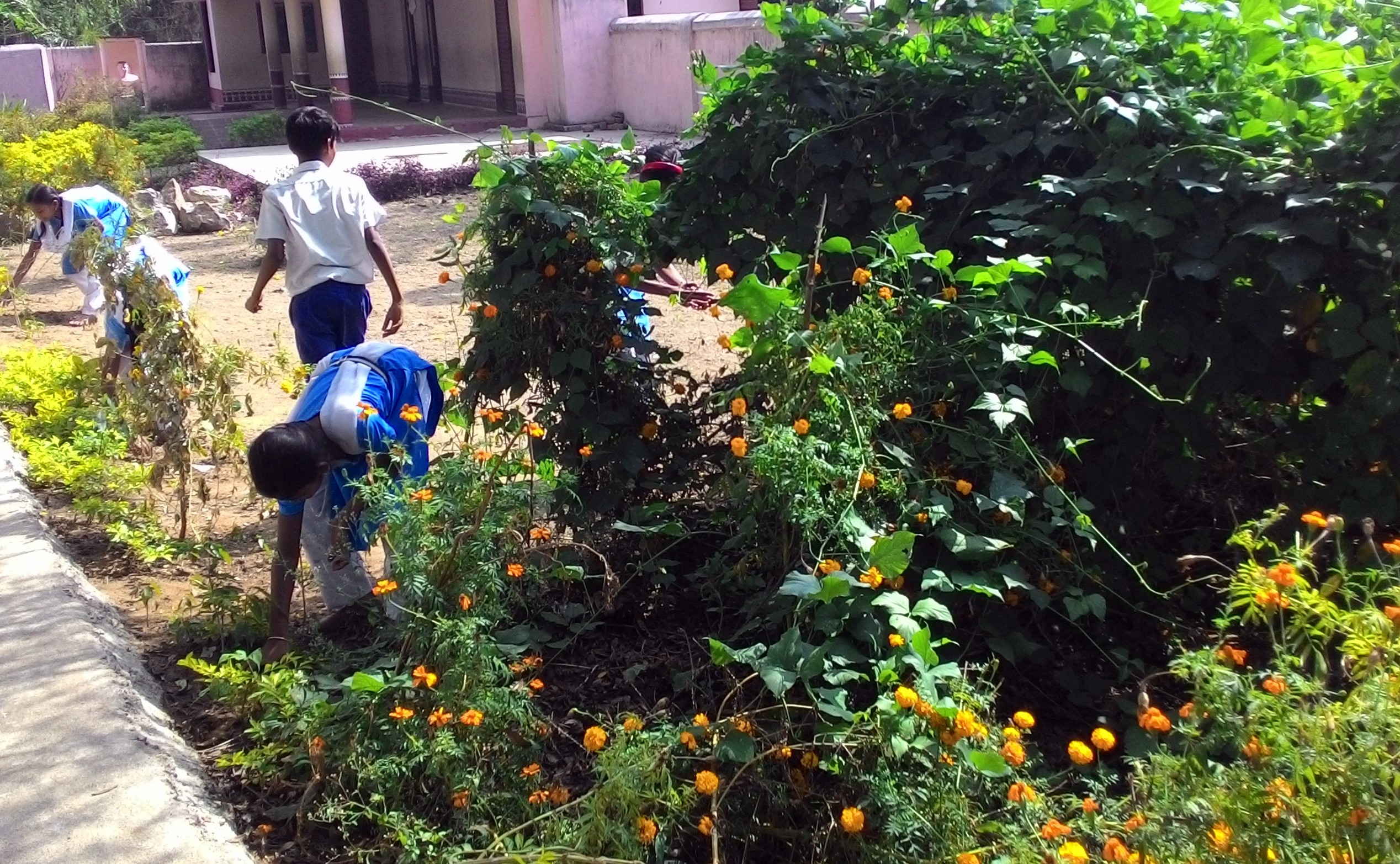 The harvest from the kitchen garden is used in the preparation of mid day meals for the students. The students feel that the taste of vegetables they grow is much better than what they taste when they buy vegetables from outside. Children in turn go back home and discuss these with their parents.

Pradeep feels that “doing is believing” and as these students are first generation literates, the practical training on kitchen gardens and composting is not only joyful but facilitates independent thinking among children and also makes them aware and believe in environmental friendly activities. The joyful learning processes has ensured that students continue their education. “There are no dropouts from the school, anymore”, says Pradeep happily.

Pradeep has been active in interacting with farming communities through the Pani Panchayat, with school children and their parents (who are also farmers), and also has built strong linkages with the village level workers and the block level officers. Presently, Pradeep is the contact person for all the development activities at the block level. He discusses various issues especially creating awareness on the environmental aspects.

Pradeep has been able to influence a number of people in the society with his views. Starting from students in his school, it extends to the teachers who are presently working and those who have retired as well. For example, Mr. Kali Mishra, who hails from Sama Singi in Berhampur Gram Panchayat, is a teacher in this school who spreads the ideas back home. His close friends in two NGOs, for example, LIPICA in Berhampur and Jan Jagaran in Digapahandi block have spread his ideas. In fact, he is the resource person for the Kansamari farm of Jan Jagaran maintained by differently-abled persons. His strongest influence can be seen on the Pani Panchayat members whose membership includes 57 villages in the block.  Besides, he actively engages with the eco-club students at the block level too.

Pradeep sphere of influence has been much wider, owing to the fact that his position as a school teacher and an active member of Pani Panchayat gives him opportunity to interact widely. More importantly, his personal qualities like his passion and dedication have played a great role. For instance, Pradeep is a key person in the village who is respected for his education and abilities. His passion towards development work, his prior experience in development organizations, his networking abilities and contact with the outside world has made him evolve into a person gaining lot of respect from the society. On the other hand, his position of being a head master has given him an opportunity to mould the younger generation too. All these qualities have played an important role in spreading information on agroecology.

The case of Pradeep shows that even an individual can make a lot of difference to the society, if driven by passion.  The power of information sharing comes out explicitly in this case. If information reaches the right person with passion, there is no limit to the impact that it can create. Even one person, one farmer or one educator can bring about a change in the society he lives.