More than 80% of the area in Dharmapuri district in Tamil Nadu is under dry land agriculture. Out of 8 blocks of Dharmapuri district, Pennagaram block with 33 panchayat villages is the most backward area in the district. Pennagaram has red sandy soils. The soils are low in nitrogen and phosphate content. In the dryland areas, farmers cultivate millets and pulses like ragi, samai, horse gram, mochai and red gram during the rainy season. Sorghum and little millet are grown in kharif and rabi under rainfed conditions. 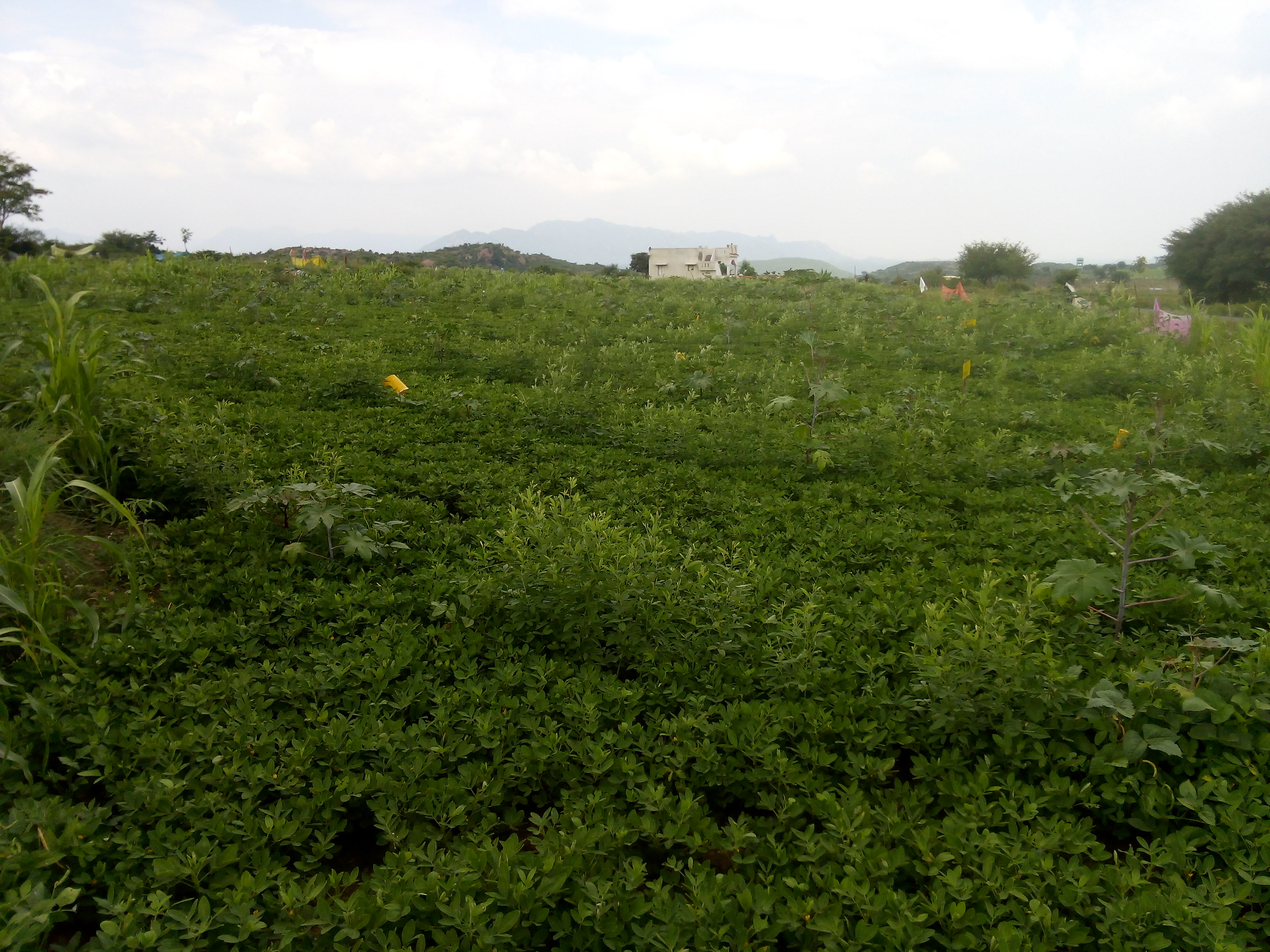 Farmers in this region are faced with uncertain and uneven rainfall patterns. Also degraded land resources with very less organic matter content, declining ground water table, high run off of rain water leading to water and soil erosion, inappropriate production practices such as monocropping, indiscriminate use of chemicals, resources intensive crops, all have resulted in unsustainable farming. AME Foundation, a development organization, has been working with farmers in Pennagaram block from 2011-12, with an aim to help farmers move towards resilient farming systems by adopting ecofriendly biological options.

In 2011-12, AMEF started working in 5 villages, which expanded to 25 villages by the end of 2016-17. In all the villages, preliminary meetings were conducted to interact with the communities and explain the purpose of the intervention. Grama sabhas were organized to inform the village communities and the local leaders about the purpose of intervention and to seek their support.  PRAs were conducted in all the villages to get to know about the village situation and most importantly to understand about people, their conditions, their livelihoods, their challenges and limitations. The exercise helped in building rapport with the people. Around 60-80 farmers, both men and women participated in each village which enabled farmer groups to assess their resources collectively, depict relationships, problems and opportunities to support their farm activities.

Interested farmers in each village were identified and organised into eco farmer groups. Twenty member groups were formed in all the villages. Meetings were held in each village to discuss about crop plans, required inputs, aspects like group management etc.  For the first time, these groups of farmers analysed the situation, identified gaps and explored possible opportunities. For instance, in 2013-14, the groups decided to cultivate groundnut crop as main crop if there were timely rains, red gram and lab lab as intercrops, sorghum as border or barrier crop and castor as a trap crop. In 2014-15, there was less rainfall. Farmers in 13 villages could go in for groundnut sowing using pre-monsoon showers. To compensate the yield loss from main crop, farmers from all these 13 villages went in for short term crops like black gram. In the remaining 7 villages, late sowing of various crops was taken up –  Jowar in 3 villages, Same  in 2 villages and Ragi crop in 2 villages was done during September end.

Insufficient attention to soil nutrient management in dry land is quiet common. Farmers see reducing livestock population as the reason for non-availability and application of organic manure to soils. At this juncture, some of the alternative options like seed treatment, green manuring, enhancing biomass on farms, FYM enrichment, use of biofertilizers, Rock phosphate etc., have given new pathway to the farmers to adopt them as best alternatives.

Seed treatment with bio-fertilizers like Azospirillum, Rhizobium, and antifungal agents like Trichoderma viride, soil application of Pseudomonas, Phospobacteria along with FYM is one of the important steps that farmers learnt in strengthening plants from the very start. That way, they could successfully cope not only with pests and diseases, but also with unfavorable environmental conditions such as stress and nutrient-poor soils. 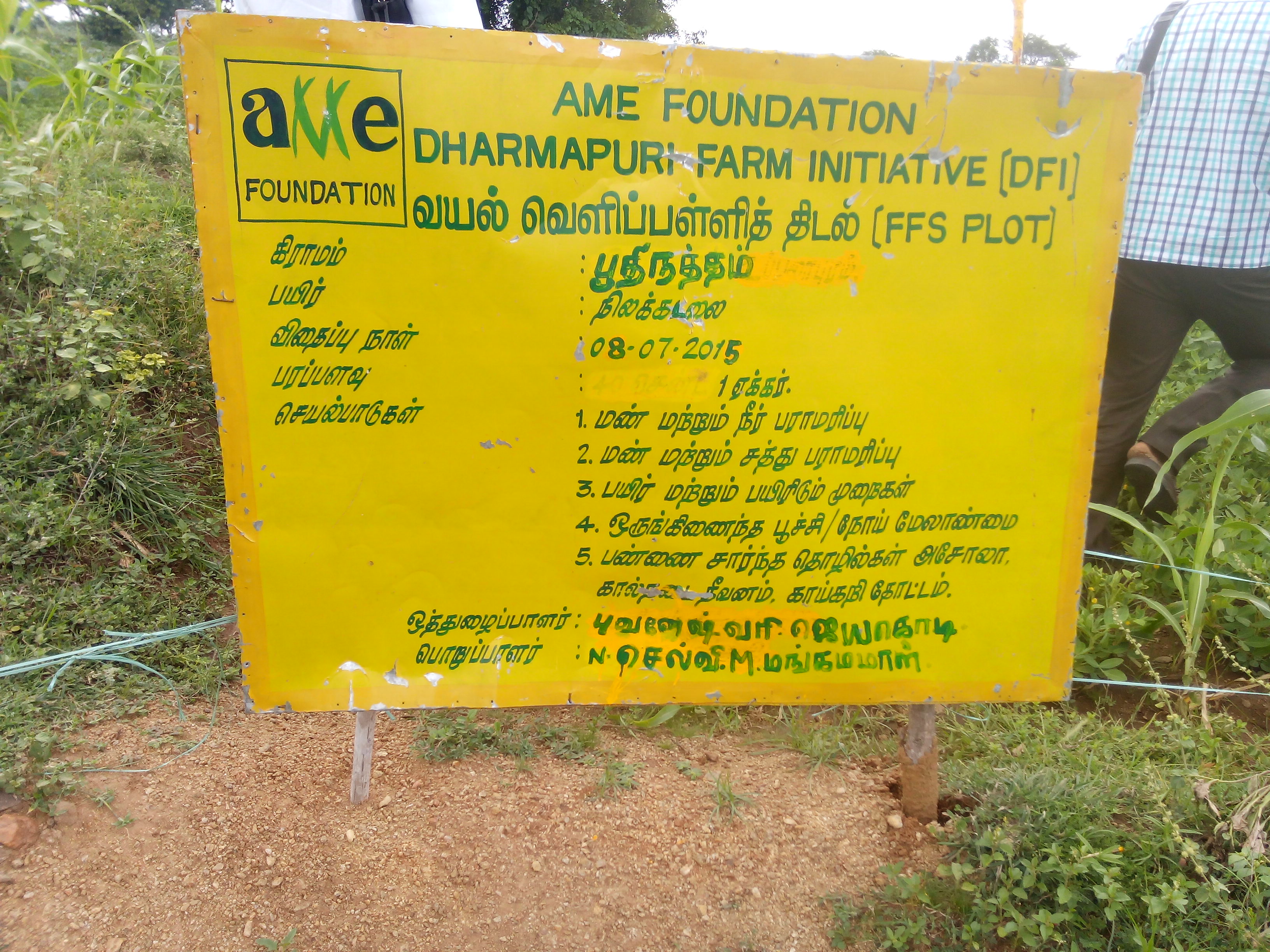 Green manuring was another practice that farmers learnt through FFS. Women farmers took up sunhemp as green manure crop, before the main crop. In 2012-13, for the first time in these villages, the farmers incorporated around 1-1.5 tons of sun hemp to plots. Also, they were guided in estimating the amount of Nitrogen fixed through the incorporation of sunhemp. Farmers found that sunhemp was also a good low cost alternative. While purchased FYM costs around Rs. 2500/tractor load, the cost of incorporating 2-4 tons of sunhemp was only Rs. 300-400/acre.

Farmers learnt that adding FYM to soil enhanced the water holding capacity of the soils. Small experiments were conducted during FFS to drive this point. Enriching FYM was another practice that farmers learnt to improve the soil nutrient levels. 300 kgs of FYM was enriched with 50 kg of Rock phosphate and one kg each of Rhizobium,  Azospirillum, Trichoderma and Phospobacteria.

Mulching was promoted for limiting the moisture loss from the soil. For instance, in 2013-14, red gram as a major intercrop in groundnut field suffered moisture stress during flowering stage after the harvest of groundnut. Heat waves, moisture stress due to failure of one or two rains, generally expected during flowering stage, had resulted in 30-45% flower shedding. As this was unexpected, contingency measures were planned to adopt stubble mulching underneath the red gram. Through this operation further flower drops were controlled resulting in mulched red gram plants yielding 0.5 to 1 kg higher yield than the non-mulched plants.

Enhancing crop diversity by including multiple crops on the farm was a strategy promoted to reap multiple benefits – improve farm resilience, pest management, provide good nutrition, source of additional food and income, and drought management.  Farmers in Gandhinagar, Thinnur, Anumanthapuram, Attapallam villages tried out several crop combinations. In groundnut based cropping system, castor as trap crop,  sorghum as border crop, red gram as major inter crop and cow pea as another inter crop was taken up by 280 farmers. Inclusion of multiple crops was also one of the ways to manage pest incidence.

Sequential crops were promoted and farmers were guided to cultivate black gram which extended the crop production period by another 40 days. This was taken up after harvesting the main groundnut crop, to make use of the residual moisture. Around 300 hundred farmers cultivated horse gram as a sequential crop in 150 acres. In all the villages, except Bilianur, farmers could go for second crop of horse gram using the residual moisture and nutrients fixed by groundnut. This not only gave them extra income but also served as a source of fodder for animals.

Many experiments and studies were taken up during FFS to enable farmers to get convinced on biological and non-pesticidal management of crops. Farmers were encouraged to do biotic and abiotic assessments in farm ecosystem and decide the pest management practice. For example, leaf cutting experiments helped them to avoid pesticide sprays. Importance of border crops and trap crops were tried out. In some of the FFS sessions, farmers tried out intercropping of groundnut with red gram and lablab, while sorghum was sown as border crop and castor and cowpea as trap crops for sucking pests. In case of samai, they tried sorghum as border crop with red gram as intercrop.

Seed treatment with biologicals improved the rooting pattern. This further enhanced the crop withstanding capacity during moisture stress, besides fixing nitrogen in the soil.

In many cases, measures such as higher biomass application through sun hemp, EFYM, biofertilizers etc., coupled with effective in-situ soil moisture conservation helped in protecting crop from severe moisture stress. Use of soil amendments like FYM and EFYM, bio-fertilizers, rock phosphate etc., helped in keeping soil profile and root zone temperature lower during drought period.  An analysis of sample harvest taken from 30 plants indicated a significant difference in plants between FFS plots and farmer plots in terms of pods per plant, plant population, no. of branches, nodules, over all biomass output per plant etc.

Adopting an appropriate variety served as a good coping mechanism to escape from moisture stress. Farmers took up cultivation of VRI2, a drought resistant variety, which could cover the soil surface quickly by producing extra branches and leaves, which served as self mulch. Besides, VRI2 had good seed vigor and has good root penetration into the soil.

Adoption of eco-friendly practices saved the crops from total failure owing to drought conditions. For example in 2015-16, just ten to fifteen days prior to harvest, while there was insufficient rainfall in some areas, it rained heavily in some other areas. This affected groundnut, red gram and cowpea crops. However, by the adoption of LEISA practices, the crops fared better. Application of higher quantum of FYM helped to increase the moisture holding capacity of soils.

Biological management of crops enhanced the crop yields and provided diversified food for the farming communities. In a diversified cropping system, apart from main crops, farmers gained a lot from inter crops, border crops and sequential crops. Besides main crops like groundnut and Ragi, farmers on an average, harvested 8-10 kgs of cowpea, which was grown as an intercrop in groundnut. Castor as a trap crop yielded 80-100 kgs; sorghum as border crop yielded 10-25 kgs. Farmers could harvest around 500 kgs of sorghum stems which served as livestock fodder. Sequential crop like horsegram which was grown to make use of residual moisture was another source of food for farmers. In 2014-15, farmers could benefit with an overall horsegram yield of 300-350kgs/acre, of which around 100-150kgs was kept for family consumption and remaining 200kgs was sold.

Adoption of alternative practices reduced the expenditures on chemical fertilisers and pesticides, thereby the costs of production.  With adoption of soil fertility enhancement measures, farmers applied less fertilisers. Use of IPM measures, especially the yellow sticky traps reduced the number of pesticide sprays and thereby the water use.  The cost of cultivation decreased by 24% in groundnut, 20% in ragi and 3% in samai. With reduced costs of cultivation, huge gain was observed in net incomes. The net income increase was to the extent of 82% in groundnut, 42% in ragi and 71% in Samai.

A holistic approach to crop management is necessary to make farming more remunerative while conserving and enhancing the quality of natural resources. A seasonlong approach like the Farmer Field Schools provides a great opportunity for the farmers to assess, discover and learn on the farm, understanding the ecosystem and the biological science of farming.