The farmers from Indo-Pak bordering villages turned out to be far more resilient than expected amidst challenges like transportation clampdown during lockdown, locust attacks and other challenges. 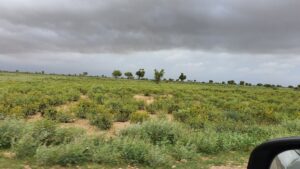 “2020 wasn’t that bad for us”, pronounces Sadasukh Beniwal of Godu Village, Bikaner. While the country was in turmoil because of the COVID-19 pandemic, things have been quite different for the farmers of the villages near the Indo-Pak border. This year marked a good rainfall in the villages of the driest state of Rajasthan. Jaisalmer district received surplus rain than what it receives in a normal year as reported by the Indian eteorological Department.

The farmers across Jaisalmer district and other bordering districts of Bikaner were in an ambivalent position in March, when the first phase of lockdown was imposed by PM Narendra Modi. Laxmi Devi, a farmer of Odhaniya village in Jaisalmer district asserts, “Soon after the lockdown was called, local mandis were shut down completely. We had no option to sell or buy seeds for Kharif season from Bikaner or Jaisalmer Mandis. We limited ourselves to the nearby villages and Pokhran market”.

Mother nature has work for everyone, still people go to the towns for work

Farmers like Laxmi Devi have been pursuing sequential cropping in her field. These practices turned out to be lucky this year. “Till lockdown, it was all fine, but then I heard of the pest attack (refers to the locust attack) in the border villages. We were all worried. It was the beginning of the Kharif season and I had toiled a lot in my field. I would not expect my crops to be destroyed”. Fortunately, Laxmi Devi’s field and her village were not as affected by the attack as it hit other villages. She hailed her resilient cropping system for this. “Earlier these attacks were less. Whenever there was a pest attack only a few crops got destroyed as our ancestors had pursued and have taught us multi-cropping in the fields. The pests get attracted to some crops and don’t like some, which act as repellent. Eventually some remain safe for us”, explains Laxmi. This argument was agreed by most of the elderly farmers who felt that this year locust had killed the crops of those farmers who followed monocropping and used a lot of pesticides. Prema Ram, 62, from Fulasar village in Bikaner district asserts, “We have seen several pest seasons and have managed those effectively with whatever crops we grow in this desert. But when we do multi-cropping pest attacks are less. We don’t use market-based seeds. We prefer Neemastra made by Nimbodi (neem seeds) and cow urine as organic fertilizers and pesticides for our crops and these are safer”.

Women farmers like Laxmi who farms 25 bigha of dryland were quite apprehensive of the consequences of the lockdown. “My family is completely dependent on farming and some manual labour work but I would say Corona didn’t affect us. The only impact was on our access to markets as we could neither sell our produce in the local market nor buy seeds from the market”.

While the world was in complete chaos, these farmers in Rajasthan were using their traditional knowledge systems and were effectively managing themselves, using their own seeds, using traditional fertilisers like  Neemastra, Keetnashak etc. and were also using the local village level mandis to sell their produce.

Om Prakash, a youth from Bajju Tejapura village, who also works with a local NGO says, “farmers’ life wasn’t as difficult as the labourers who returned to the villages when there was no work in the cities. Some of them got immediate farm work, while some of them had to wait for the off-farm activities to start”. Most of the villages in Kolayat Tehsil of Bikaner District or Pokhram tehsil had absorbed these migrant workers to the farms. The villages that were once turned out to be ghost villages, also started farming this year. These workers were involved in raising crops like moong, groundnuts etc. Sadasukh Beniwal asserts, “The rural India gave jobs when the companies were asking them to leave. Mother nature has work for everyone, still people go to the towns for work”. He also applauds a few of the youngsters who came back. “They wanted to help us with new selling places on the internet, we will soon do those!” exclaims Sadasukh.

Om Prakash pointing at the problems of farmers says, “With or without the COVID the farmers in Thar raised the Kharif crops without letting them to be burnt”. Apart from these, MSP remained a challenge during the pandemic, Durjan Singh of 16, Godu Village says, “Agriculture sector has been always ignored but the disease cannot be blamed always for this. Everyone is taking this as an excuse”. Most of the farmers couldn’t sell their produce to the government. “MSP procurement online portals were closed” informed Om Prakash. He also added that the only thing that helped the farmers were the village exchange of the produce and small mandis in the block headquarters.

Though this year was difficult in general, farmers were curious about the new changes that would surely come after Panchayat elections this year in October, Sadasukh says, “Farmer’s topic has been taken and some of the contending participants have acknowledged the need for new technologies. They are exploring ways to bring our produce on the MSP portal, Amazon and other online portals”.

The story of farmers of Thar carried mixed emotions of despair and happiness but they were apprehensive about the need to address them in their own way that they have carried through generations.