Gravity makes water run downhill, so people and communities living in mountainous areas often have more difficulties in accessing sufficient water. As this example from the Philippines shows, simple technologies can be a great help – but their application requires co-ordinated efforts among all stakeholders. 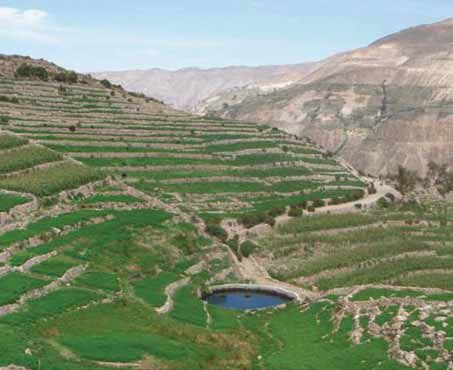 Life in mountainous areas can be hard: access to water sources is often difficult, soils are easily eroded, there is a lack of electricity and the roads are poor or non-existent, making it expensive to transport goods. Fetching water is a time consuming activity. Children sometimes miss school because they have to fetch water. Many old people who can no longer make the arduous trips down to the streams, have to pay others to get water for them. Women take their small children with them to do the washing, and spend much of their precious time.

In the Philippines, as in many other countries, the lowlands are generally occupied by richer landowners, while small-scale farmers and their families are found in the higher areas. They often have to make daily trips to fetch water. These efforts demand much time and energy, and result in a reduced consumption and use of water (estimates suggest that where water has to be carried by 100 metres, consumption is limited to 40-60 litres per day for a family of six).

Lack of water can lead to many problems: skin diseases, diarrhea and malnutrition. Water shortages also limit agricultural production: most upland farms rely on rainfall, which limits production to one crop per year. They also limit the possibility to raise livestock, to practise aquaculture or to process food products.

In short, water shortages pose a significant constraint to practicing diversified or integrated farming. The Alternative Indigenous Development Foundation (AIDFI), a local NGO based in Bacolod City, on the island of Negros, has been working with small-scale farmers for many years.

Seeing and hearing about the recurrent water problems faced by many farmers, AIDFI decided to concentrate on addressing their basic need for water for drinking and irrigation. Since 1990, AIDFI has been working on different types of water pumps and now its flagship is the Hydraulic Ram Pump.

Pumping devices are usually based on wind energy, solar, diesel or electric power. The hydraulic ram pump is not as well known, but it is definitely the best option in terms of initial investment, operating costs and the availability of parts. The only condition is that it needs to be located close to free flowing water, as a ram pump utilises the energy of flowing water to pump a portion of the water running through it to a higher elevation. No electricity or fuel is needed. For every metre drop from the source to the ram, a ram can pump the water up to 30 times higher. For example, with a drop of 4 metres, a ram can pump water up to 120 metres – and for 24 hours per day.

The ram pump is a technology which seems to have been bypassed by the industrial revolution. But its enormous potential lies in its simplicity. AIDFI’s starting point was to work with locally available materials and parts (including spares), and also to generate local employment through manufacturing and installing the pumps, so as to make this technology cheaper and more easily available.

The ram model uses ordinary door hinges (available anywhere in the world) and a check valve made from a piece of a car tire. Adopting the ram to other countries is easy: it just involves adapting it to the locally available door hinges. As seen in the villages of Murcia, in Negros Occidental, the installation of a ram pump starts with a demand for water.

In some cases this comes from an individual client or an NGO, while in others AIDFI takes the initiative to start talking about water in a community. In Anangue, for example, the first step involved talking with the leaders of the community about the importance of an autonomous but democratic structure for managing a water project. We then invited all villagers to see a ram pump working, with a miniature model demonstration.

The next step was to set up a water association, which plays a key role, distributing roles and responsibilities and deciding who will be the contact point with AIDFI. The whole group also decides which villagers will be trained to become the local technicians. The technicians report to the association, which pays them for their services usually on a monthly basis, using the fees paid by all users.

Each association decides how much this fee should be and how much to pay the technicians. A percentage of the fees collected is also meant to cover repair costs, spare parts and the general maintenance of the pump, things which are all arranged by the association. The training of the technicians goes hand in hand with the installation of the pump.

In Anangue, AIDFI staff came to the village for 3 or 4 weeks to build and install the pump. The local technicians worked with the project team during this period, learning how to operate, maintain and repair it. In some cases, these villagers have some technical background, but this is not necessary.

The pumps are fabricated in one place because this requires precision skills and machines, but spare parts can be readily bought from local hardware stores and replaced.

One of the most common results we have seen is that villages never have enough water: the need for water seems to increase in line with its availability. Once the pump starts working, all sorts of “new” uses are discovered, and demand grows. This is why the association needs to develop strict regulations which ensure equal sharing among all – for example by establishing common tap standsin the community to provide drinking water.

Irrigation is often the main water use and this water has to be shared and distributed evenly. Setting up irrigation schedules and internal regulations is one of the most important tasks of the water associations. AIDFI supports all the associations that ask for help in drafting these regulations, but feels that it must not interfere further; nor has this proved necessary.

Conventional pumps and dams have caused conflicts among many communities as they block some users’ access to water (for example, those farming downstream). This is an important factor to consider in all discussions involving upstream and downstream users. But, unlike other forms of water pumping, the ram pump only pumps up a certain portion of the water passing (between 5 percent and 40 percent). The rest of the water goes back to the stream.

During dry seasons it is important that small streams are not emptied by individual villagers pumping up too much water from the dam or stream; the ram pump leaves enough water to flow downstream. This makes more elaborate systems possible: in Murcia there is a system with 11 kilometres of pipelines coming from four ram pumps. It passes through several different villages, each one with a reservoir and series of tap stands, controlled with gate valves. One water association covers these different villages, as there is a strict implementation of rules needed. Villagers are allowed to open the tap stands only at certain agreed times.

* Keep the design as simple and basic as possible, taking local materials as your starting point.

* Use a miniature of a ram installation during community orientations and for display purposes, at trade fairs, forums and workshops.

* The best promotion is an actual installation in the field. Imagine a site where people had to go down 100 metres daily, to collect a maximum of 40 litres, whom now have ten times as much free flowing water at tap stands near their homes.

* Have a good website and be at “places to be”. For example, AIDFI took a demonstration ram pump to a Techno Park and welcomed 3,000 visiting farmers, associations, cooperatives, NGOs and government agencies since November 2008.

* Aim at different funding sources to avoid that the project is claimed by one group.

AIDFI has continued expanding its production and installation of ram pumps. This now accounts for almost 90 percent of all our work. Some installation teams have gone to work on other Philippine islands. We work with individual farmers, farmers’ associations, co-operatives, large and small NGOs and governments.

The advantages of ram pumps have also been noticed abroad. This has led us to become active in Afghanistan, Colombia and Nepal. In Cambodia we have worked with a local NGO to set up a drinking water system in Koulen, a mountain village. Work proceeded in a similar way: the only difference was that women played a role in the construction of the pumps, while in the Philippines that is seen as men’s work. But to get all stakeholders to work together remains of central importance.

Auke Idzenga is a marine engineer who has lived in the
Philippines since 1985. In 1991 he helped found AIDFI.
E-mail: aidfi@hotmail.org; www.aidfi.org