Shri Mallikarjun Patil belongs to Mukkal village in Kalghatagi taluk in Dharwad, Karnataka. While majority of the farmers across the nation are frustrated and leaving farming as it is not remunerative, Shri Patil is setting a different example. He has proved that one could make enough money through farming and has been a role model for the youth to remain in farming. By practicing sustainable and natural farming methods and avoiding chemical use, Mallikarjun Patil has been harvesting good yields while maintaining the health of the soils. 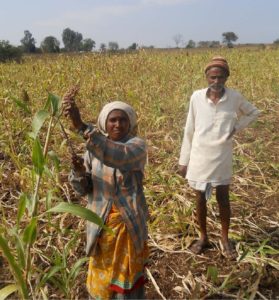 Shri Patil has been growing several crops like millets (bajra, ragi and foxtail millet), blackgram, cowpea, soyabean etc. Even today, he provides the seeds of these crops to those farmers who seek.  He owns three cows. He grows fodder on ten guntas of land which provides enough fodder for his cattle. He sells around 225 litres of milk every week.

He also has backyard poultry with a mix of Giriraja and local hens. These birds give a monthly income of Rs.5000.

By harvesting a record production of 24 quintals of Rabi Jowar per hectare, Shri Patil became the top producer of jowar grain at the taluk level. Similarly, he has harvested a record yield of 38 quintals of paddy from one acre of land.

Shri. Mallikarjun Patil has received several accolades and awards for his efforts in achieving good yields – Best farmer award at the taluk level by the Department of Agriculture in 2014-15 and Sri. Siddaroodha State Award in 2017 are a few among them.

Shri Patil firmly believes that one who depends on the soil will never fail. His firm belief in farming is evident as his both sons continue to live on farming. Whole heartedly, Shri Patil credits all the success to his wife, who is a partner in his farming journey.