Adopting an ecological engineering approach, farmers in Kerala could effectively suppress most of the palm pests in an eco-friendly  manner. While safeguarding environment, these eco-friendly strategies helped farmers obtain regular income for sustainable livelihoods.

The Kalpavriksha, coconut tree, has been serving farm livelihoods of more than 12 million farm families in our country. It is one of the most precious trees offering multiple benefits to the mankind. It provides health drink, rich nutritious food supplement and precious oil. In fact, every part of the plant offers so many diverse products useful for day to day living.

Housing a wide array of insects during inflorescence blooming in coconut, these foraging fauna, besides improved nut yields, are beneficial to the eco system, in the form of nectar and pollen as nursing feed.  More the pollinators, larger are the yields of coconut.  Honey bees and stingless bees dominate insect foragers of tall varieties, whereas, the ants pre-dominate the dwarf varieties. The quantum of these insect foragers indicates the health of the coconut eco system, encouraging pollination and infusing diversity in palms. Any disturbance in these associations through unscientific chemical interventions will have severe ecological backlashes.  It has been reported that a spectrum of insect pests affect the leaves, inflorescence, young buttons, immature and mature nuts as well as internal bores, damaging palm crown. 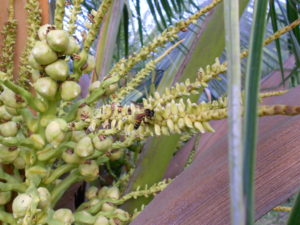 Ecological engineering approach has been tried out to reduce the pest incidence in coconut palms. A crop habitat based pest regression module has been developed at ICAR-CPCRI with Kalpasankara coconut hybrid and intercrops such as nutmeg, rambuttan, banana, curry leaf, jack, marigold, custard apple etc. It was observed that the pest incidence was comparatively low in the ecological engineering plot while it was two to four times greater in mono-cropped coconut garden.  The crop biodiversity disoriented the pests away from ecological engineering garden, ensuring a high population of pest defenders and pollinators. Also there has been a significant increase in honey bee population on coconut and coral vines. All this has resulted in enhanced coconut yield – averaging 161 nuts per palm per year after five years of planting. In addition to reduced pest incidence, the model resulted in generating sustained income and employment through complementary utilization of resources.

Ecological engineering is about manipulating farm habitats, making them less favourable for pests and more attractive to beneficial insects.

ICAR-CPCRI has found a potent green muscardine fungus, Metarhizium anisopliae that could control the beetle. Spores of M. anisopliae enter on cuticular contact and kill the grubs in a fortnight. A dosage of 5×1011 spores per cubic metre of pest breeding material is recommended for field application.  ICAR-CPCRI has developed technologies for mass multiplication of M. anisopliae in an inexpensive locally available substrates, such as, coconut water, cassava chips and semi-cooked rice.

Base line survey  of  coconut farmers of Kerala indicated non-availability of biocontrol agents as the principal constraint for adoption of IPM for rhinoceros beetle. Farmers were organized into clusters through Farmer Field Schools for imparting knowledge and skills on biological pest control.  Farmer field schools enabled mutual learning as well as better understanding how the practices could be adopted in a larger area within a limited time period.

The programme was undertaken in Kandalloor, Krishnapuram and Devikulangara panchayaths of Alappuzha district (1500 ha) and Edava panchayath in Thiruvananthapuram district (520 ha) of Kerala state. Coconut farmers of different categories belonging to both the genders, actively participated. ICAR-CPCRI scientists guided the process.

Smt. Rajini Jayadev, President, Block Panchayat, Bharanikavu is a staunch supporter of biological control methods. She has been producing of M. anisopliae in her house and providing it to her neighbours on demand. She has been instrumental in spreading this technology at the Panchayat level,  boosting confidence among the farmers.

Women farmers in Edava panchayath, under the aegis of Edava Womens Association, were organized as clusters, sensitized and trained  by ICAR-CPCRI scientists, for mass production of M. anisopliae by using semi-cooked rice. The house premises of the participants served as the production area. Group members spent 1-2 hours/day on an average, for mass production. Innoculation of green muscardine fungus was undertaken in candle lit enclosures, to create near sterile environment, to avoid contamination.

It was found that the mean average knowledge index of the FFS farmers (51.31) was 65 per cent more than the non-FFS farmers (31.10), proving  that FFS is an appropriate extension approach for knowledge improvement and technology adoption. The active participation and facilitation of extension officials and peoples representatives were also ensured for sustainability and continuity of the initiative.

The women groups functioned as master trainers for further spread of technology to nearby villages. They also ensured timely supply of bioagents. The entire farming community is now convinced of this technology. Cattle farmers were also targeted by the group in distributing the locally multiplied M. anisopliae for delivery on to the cow dung pits, the main breeding point of the beetle.  Mass multiplication is recognized as an effective strategy for revenue generation. Several Kudumbasree missions (Edava Women’s Association) have initiated into this venture and doing service to the fellow coconut farmers and sustaining earnings for livelihood.

Farmer participatory community approach adopted, formed the hallmark success of the programme, which got expanded to the entire village in one year period reducing the pest incidence, considerably. A reduction in rhinoceros beetle infestation in the FFS areas to the extent of 76-85% is an indication of the efficiency of area-wide community adoption.  In addition to the pest reduction and overall yield improvement in coconut, conservation of the environment through eco-friendly approach was the key success of this strategy.

Area-wide demonstration of the M. anisopliae technology in suppressing the rhinoceros beetle has been a remarkable success in all coconut growing regions of the country. Tremendous reduction in pest damage by 81.2% could be accomplished in a period of two years in all the tested regions following a lateral adoption of the technology.

The coconut leaf eating caterpillar, Opisina arenosella, is a major pest, occurring in all coconut growing tracts across the country. The infested portions get dried and form conspicuous grey patches on the upper surface of the lower fronds.  Severe pest damage results in complete drying of middle to inner whorl of fronds, leaving a burnt appearance. Damage results in tremendous reduction in photosynthetic area, decline in rate of production of spikes, increased premature nut fall and retarded growth. Extensive feeding of caterpillars causes a crop loss of 45.4% in terms of nut yield, in addition to rendering the fronds unsuitable for thatching and other purposes.

Biological control has been successful in the bio-management of O. arenosella. Area-wide field validations on biological suppression of coconut black headed caterpillar through release of stage-specific parasitoids was established in various locations of coastal Kerala and south Karnataka by ICAR-CPCRI, covering 1500 ha.

In Jajur village of Arsikere, Karnataka about 15 acres of coconut garden was found infested with this pest during 2013. Farmer participatory demonstration was undertaken in the heavily infested farm owned by Sri. P. Rudrappa. With timely release of parasitoids, the coconut palms recovered and  had a new clean and green look within a period of 12 months. Technology options successfully practiced included removal and burning of heavily infested 2-3 outer fronds, release of stage specific parasitoids Goniozus nephantidis and Bracon brevicornis and adoption of palm and soil health management strategies. Emergence of new fronds after technology intervention is so convincing that nearby farmers emulated this bio-control strategy within a very short period. The participating farmers took it to nearby locations, making the entire zone pest free with successful establishment of parasitoids.

The invasive pest, rugose spiralling whitefly (RSW), Aleurodicus rugioperculatus was introduced into our country during 2016 and in a short span invaded all coconut growing regions of South India. The pest feeds from undersurface of leaves and produces enormous honey dew, which attracts the sooty mould. The entire palm gets blackened in the process.

The pest population was greatly suppressed by an aphelinid parasitoid, Encarsia guadeloupae, which in a period of four to five months, could effectively parasitize more than 85% pest population. The parasitized pupae are normally blackened and can be easily identified from the creamish healthy pupae.

ICAR-CPCRI has evolved an augmentative release strategy of the these parasitized pupae. Cut palm leaflets of 10 cm  containing parasitized RSW pupae were prepared and distributed to farmers in the new areas of whitefly outbreak. This release of cut leaflets enhanced the parasitization potential swiftly in the new area of pest emergence. More than 500 coconut leaflets (10 cm) containing parasitized RSW pupae were released in pest prone West Godavari region in Andhra Pradesh during January 2018 for the early build up of the parasitoid.

ICAR-CPCRI has also discovered a Leiochrini beetle, Leiochrinus nilgirianus Kaszab, associated with scavenging action on the sooty mould deposits on coconut palm that are developed on the honey dew excrements of RSW.  Adult beetles and immature stages were generally confined to the undersurface of the palm leaves during daytime, but were found feeding on sooty mould during morning hours in damp conditions. On an average one adult beetle could clear 1-2 mm2 sooty mould laden area in a period of one minute. Consumption of sooty mould on palm leaflets that interrupted photosynthesis by insects, thereby rejuvenating palm health, is one of the first instances of beneficial scavenging activity reported in any economic crop, so far. The pesticide holiday strategy propagated by ICAR-CPCRI has reduced the pestiferous potential of RSW and reduced its impact very swiftly.