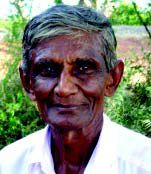 Next to air, water is the most important for the survival of any living organism. In agriculture, water plays an important role in crop production. Day by day, water is becoming scarce and even the available water for agriculture is not of good quality as much of it is contaminated in many ways. It could be saline water, may have sodium salts in excess etc. So it is very important to use water very efficiently in crop production and see more grains from every drop of water used in crop cultivation.

During the past two decades even the underground water is going deeper and deeper by 3 to 6 meters every year. Main reasons for this acute scarcity of water is lack of adequate humus content in the soil enabling preservation of water. Owing to continuous application of nitrogenous chemical fertilizers to the soil the humus content has come down to 0.3% in 2010 from 3% during 1960. Another reason for reduction of humus content of the soil is negligence in conserving soil. So it is high time to protect the soil from direct hot sunlight by providing mulch (live or dead), by growing trees and bushes around the land and even along the bunds (if the land is longer or wider than 60 meters) as wind breaks. Every 10 meters of tree or bush can protect 100 meters of soil from fast blowing winds; the soil should always be crumby and not dusty or powdery. The soil particles are bounded into crumps only when the land is totally free from use of agro-chemicals of any nature. It is only then the soil organisms increase in numbers and work with plant exudes, physically, chemically and biologically and increase and regenerate soil productivity and binds and makes the soil crumby and bring down the soil erosion by wind and water.

It is also very important to understand that wind breaks reduce soil desiccation by fast winds more than the hot sun. The trees also encourage water infiltration by the pores created by their unimaginable roots in the soil. One can think the length of roots of a big tree, when a grassy plant like rye can have 6600 miles (10250 Kilometers) of root length. The most amazing thing is that the root tips withstanding the friction of the rock particles as if they are coated with diamond. So it is the humus content of the soil, which can hold 10 times of water of its weight and conserve from percolation and evaporation and provide that water for roots at rhyzosphere. This water preserved by humus would be constantly available for the innumerable soil organisms available at different strata levels of the soil. Without increasing the soil carbon or humus content in the soil, it is very difficult to improve crop production. All other efforts of building giant dams and plans to connect Ganga-Kaveri may prove futile and end up in more problems like submergence of vast fertile soils of the dam area and creation of wet deserts in the command area by salination. We should understand that crop yields are lost more by excess water than by less water. Water is only a mode of transport for minerals to be pumped into the plant system, having had dissolved in it, and transpo-evaporated through the stomata’s (pours at the bottom of the leaves). If we plant sunflower plants at different spots in the cultivated land at every 30 meters distance and find them withering at 9 A M we should provide irrigation, otherwise common crops have enough water in the soil. So to increase the crop production, humus content is very important in the soil at least by 2%.

Again the most unfortunate practice is to grow paddy with submerged water even with bore well pumped irrigation, almost with the use of 5000 liters of water to produce 1 kilogram of paddy, not rice. With adaptation of System of Rice Intensification or also known as Madagascar method, use of water could be brought down to almost 50% to 60%, with higher yields atleast having doubled without damaging the soil health by salination. Since we have most of crop production by rain fed cultivation, we should encourage micro millets and tubers which are more drought and insect damage resistant than H Y V and hybrids and most harmful G M crops which can totally ruin the Indian agriculture production and the health of all living organisms of the creation. If the proposed seed bill is passed by the Union Government, then there is every danger of more G M seeds being permitted for commercial cultivation which may destroy our agriculture totally.

Shri Narayana Reddy is a legendary organic farmer and is one of the most
sought after resource persons on ecological agriculture.