LEISA INDIA > Interviews > Agroecology in Africa has a female face

A community educator and food justice activist, Leonida Odongo has an impressive knowledge of the reality of farmers in Africa. In this interview she talks about the impact of Covid-19 on women in Africa and the importance of tafakari; reflection with farmers on their own experiences. “It is becoming clear that the future is agroecological”. 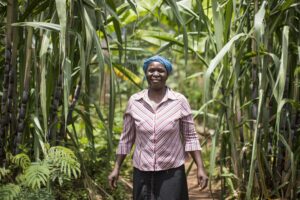 How has Covid-19 affected women in Africa?

Covid-19 regulations in Kenya required farmers to have a permit to transport food from one county to another. This was especially the case at the onset of the pandemic in Kenya in March 2020, but many farmers (particularly women) could not afford these. Other markets were closed to contain the pandemic. This was problematic because open air markets are key sources of livelihoods for women. There was also a lot of brutality meted on traders to enforce these measures, for example through the use of teargas to scatter the traders. Due to the financial stress and because people have to stay at home, there are also more conflicts within households, which has contributed to a spike in genderbased, domestic violence in particular.

Market restrictions also led to increases in food prices for consumers. Other regulations restricted people’s movements between counties; As a result, families, especially those in informal settlements, had great difficulties in getting food. Some informal settlements were completely locked down. While the government announced that food would be provided to these settlements, local administrators controlled this food and only distributed it to people that supported them. This led to rallies and demonstrations, for example in Eastleigh, where people chanted: “You can’t lock us up and not give us food”, when the government enforced a lockdown restricting movement in and out of the area due to rising cases of Covid 19.

In addition, many companies in the capital city and towns shut down. Employees did not get their salaries due to closures and could not send remittances to rural areas – a crucial source of income for many rural families. This meant that farmers that depend on remittances were not able to till their land on time. 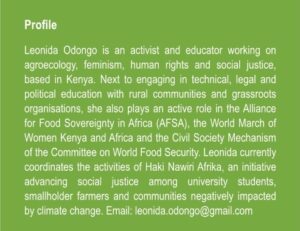 This situation was compounded by a locust infestation during the period of the pandemic. The government’s main counter measure was aero-spraying, which we know has negative effects in terms of climate change and toxicity. Farmers have not received support to mitigate the impacts of both the pandemic and the locust infestation.

What is the biggest systemic challenge for African farmers?

Agribusiness companies have discovered that food is a billion dollar enterprise and are increasingly entering the African countryside. In even the most remote rural communities in Kenya, you will now find agribusiness shops that sell chemical fertilizers, pesticides and chemically produced seeds. Agribusiness companies try to convince farmers to use chemical pesticides, claiming it makes the work easier and makes them have higher yields. However, what they don’t say is that pesticides destroy biodiversity, make the soil toxic and kill earthworms, butterflies, bees and other organisms. Research in Kenya has found alarming levels of pesticides in fresh foods, which are partly  responsible for increases in cancer and other diseases due to the carcinogenic components they contain. Many of the pesticides available in Kenya have been abolished by law in other countries. Unfortunately, weak legislative systems in Africa are leading to the continent becoming a dumping ground for what is no longer useful in other parts of the world.

How do you address the promotion of pesticides?

We use Tafakari, a Swahili word meaning ‘reflection’. When working with farmers, you cannot demonise how they produce and what they are using without presenting alternatives. So we hold community sessions where farmers are able to reflect and share their experiences. Farmers often tell me that 10 or 20 years ago they grew food without using any chemicals. Now they do: prior to seeding, when crops are growing and even during harvest. Often they say that while these chemicals increased production initially, yields are now declining. This is an entry point for us to discuss various issues. For instance, soil fertility. We ask farmers to bring a glass of soil from their farm and to observe how many leaves, earthworms and other organisms they can spot. If there are no leaves, it means there are no microorganisms. If there are no earthworms, it means that chemicals have killed them. With no leaves and  organisms it also means that there is no humus in the soil. Then we reflect with farmers on the importance of  microorganisms and humus and their roles in soil fertility. We also use theatre to spark reflection. For example, farmers take the role of bees, farmers, butterflies or chemical companies and each actor shares how pesticides impact them. At the end a judge, who is Mother Earth, makes a verdict. In this way learning is made as easy as possible. After every session we converge with the audience to share their experiences and we discuss their challenges.

Art is a starting point to reflect on change.

In some of our reflections with farmers we invite an artist or a musician to express culture and its relation to the way food is currently produced. Musicians can play a song about traditional life in Africa and relate this to what is happening now. For example, right now there is a lot of individualism. It used to be unheard of to buy seeds from a shop, because you could always get them from your neighbours. Art can be a starting point to reflect on change.

What is the secret to the success of this approach?

Farmers want to see tangible change, so we discuss things they can associate with. The beauty is that we co-create knowledge informed by the farmers’ own reflections and experiences. What we enjoy very much is transgenerational knowledge sharing, for instance when elderly farmers talk about the different herbs that can be used to make organic fertilisers and when young people participate in these sessions to learn from elderly farmers.

We also ask local, innovative farmers to come to talk about how they produce. When crops are failing, farmers approach them to ask: “how come your crops are not dying like mine?”. These exchanges between farmers really help to re-emphasise that indigenous, agroecological forms of production really work. We also organise practical training on making compost, biofertilisers or natural pest repellents, for example from the leaves and bark of the Neem tree. We don’t put too much emphasis on writing and instead focus on listening and practical exchange.

What is the role of women and feminism in these initiatives?

Agroecology has a female face. The majority of people who till the land and save seeds are women, who have relationships and knowledge that are important for agroecology. Sadly, when you go to an African household you will find that men control the land, cattle and coffee or tea plantations. These are deemed to be ‘male’ crops, whereas women control crops that do not earn cash for the household but are mainly for subsistence. Ironically, it is the women who harvest the tea and coffee and take it to the millers for processing, but when the cash gets paid, it is the males who control this money. In some cases, when farmers are paid bonuses or when prices of commodities in the market go up, men tend to leave home, go to the nearest town and spend all the money. That is why it is important to start a dialogue about food production and who controls the resources. The community dialogues enable women to have safe spaces where their voices can be heard and their concerns listened to. These platforms also provide opportunities for women to recognise their importance as women, not only in terms of reproduction but also in terms of production. They enable women to get access to opportunities to interact and speak about issues such as domestic violence, reproduction, health and education or discuss other issues affecting their children.

Women can be bold, resilient and transformative.

Patriarchy is very much entrenched in African culture and it takes time for it to change. In communities we have discussions around gender roles about food production and the overall work on the farm and in the household. We ask: Why is this happening? What is the economic contribution of each person in the household? Why do we need to change? In these platforms we get women to speak directly to men on why patriarchy hurts food production. This self-analysis is the beginning of changing gender roles. We are seeing that the men we have worked with are  hanging in terms of how they interact with women. But a lot still needs to be done, not only in Kenya but across Africa.

With all that is going on, what gives you most hope for the future?

What gives me hope is that it is becoming clear that the future is agroecological. The emergence of many problems including new pathogens such as Covid-19 are related to the destruction of ecosystems. This makes a strong case for agroecology. Another hopeful development is that more spaces are being created for women to participate in decision making and that women have great skill in organising. In order to change people’s mentality more structurally there is a need for stronger women’s networks that are advancing rural women’s leadership. And we see these are growing. Through dialogues we have been able to create a network of over 300 women in Eastern Kenya
that work on issues of agroecology. The ‘We are the solution’ campaign, led by women in West Africa, is another example of a strong women-led network that promotes female voices in policy processes for family farming. And in Southern Africa, there is a Rural Women’s Assembly. We find that women connect with each other faster than men; they tend to share easier. They have more spaces for interaction, not only while farming but also in the market and other places. Of course, the interaction with men is also important. You can’t solve patriarchyrelated problems if you don’t include men. But when women come together, they learn from each other and grow together. We know that organised women are bold, resilient and transformative.