Promotion of monoculture of fish species has contributed to depletion of biodiversity, thereby reducing productivity, further leading to livelihood challenges for the dependent communities. Habitat development restoring the aquatic biodiversity has benefited the Dhivar fishing communities in Maharashtra.

Bhandara and Gondia districts are known as lake districts of Maharashtra. There are thousands of traditional lakes, built about two to three centuries ago, during the reign of Gond Rulers, in the East Vidarbha region of Maharashtra. These tanks are known as ex-malgujari tanks. These traditional water bodies are used for many purposes at the village level, however, irrigation and fishery are the major economic activities since many years.

The population of Dhivar community is around 15% of the total population in Wainganga river basin. This community was working as household labourers in the houses of Zamindar and Malgujar families of this area. Fishing is their traditional business. They used to do fishing in the village tanks by the order of the landlords and used to get share from the catch. For household consumption, they used to fish in flowing water sources in the area. While male members of community did fishing activity, the women sold fish in the weekly markets.

After the abolition of Malgujari, and formation of fishing cooperative societies, Dhivar community got rights over these tanks for fishing, on priority, from the state government. Usually, the area of 5 square km is the jurisdiction of the fishing cooperative society. All tanks in this area, covering 2 to 3 villages and 2 to 5 tanks, falls under the jurisdiction of one society. All the male members of community are the shareholders of the society.

During this same period, the high yield species, Rohu, Catla and Mrigal, known as Indian Major Carps (IMC), were introduced in the tanks. With the introduction of IMC, fishing techniques also changed. Drag net came in to practice. The aquatic plants were considered as obstacle in dragging the net. The fishery department not perceiving any role for these plants in production of IMC, introduced Grass Carp as the scavenger species of these plants. The aquatic habitat was completely lost and the fish production declined owing to non-availability of food. Some of the knowledgeable community members, realized that aquatic plants are important in maintaining the habitat for growth of fish and for natural food availability. They also realized the key role of indigenous fish species for their own consumption. With this realization by community, a dialogue was initiated with the fishing cooperatives in Bhandara and Gondia districts.

The traditional knowledge of the community regarding the biodiversity elements in water body was crucial in the process of conservation and habitat development. With the support of Small Grants Programme of UNDP, GEF, MoEFCC, a pilot initiative was taken up to restore biodiversity in a tank in Jambhali village, near Nawegaon Bandh. The species diversity was documented with the help of Botanists and Zoologists. However, the revival techniques and methods was finalized with the help of fisher folks, considering their immense traditional knowledge. This activity was undertaken by the SHG of fisher folks in 2009 to 2011. This initiative was successful. The aquatic habitat was developed and the indigenous fish species diversity and production was also improved. The water birds activity also improved in the tank. 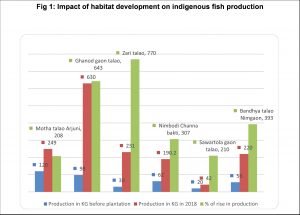 The major uses of ex-malgujari tanks are irrigation and fishery. Earlier, community used to manage them and all local level uses were recognized. Presently, the concerned departments manage these tanks, particularly for the two major uses – irrigation and fishery. Irrigation department is responsible for the maintenance, repair and improving storage and distribution. Catchment management is also a part of the department’s work but the department had not marked and mapped the catchments of these tanks, over the last sixty years. The rights of irrigation have been secured through the provision of Nistar rights, under the “Maharashtra Land Revenue Code”. The fish farmers thereby get free water for irrigation.  Fishery department with the responsibility of improving fish productivity has focused on high yield species of aquaculture, ignoring the indigenous species.  Both these limited approaches of management and development contributed to the loss of freshwater biodiversity. Tanks, have thus lost their importance as life supporting structures. 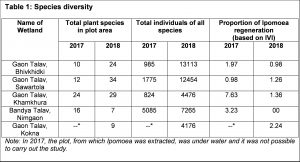 Aquatic habitat development includes ploughing of tank bed in summer season. The area, which is under water in rainy season is ploughed. After the rains, when this area has the depth of water from 1 to 3 feet, the selected species of plants are transplanted. The plants which were existing in the tank, in past, are selected for regeneration. Mainly, the submerged plants like Hydrilla verticilata, Ceratophyllum demersum, Vallisneria spiralis, floating plants like Nymphoides indicum, Nymphoides hydrophylla, Nymphaea cristata and partly submerged plant like Eliocharis dulcis were selected and transplanted. 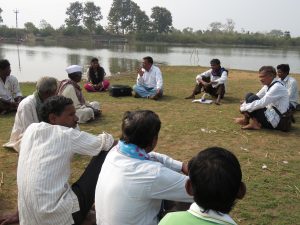 Habitat development has been carried out involving all the stakeholders like the members of local fishing cooperative society, the expert from local community and team member from organization. They jointly visit the tank to assess the need of work. Together, they prepare the list of activities to be carried out and the estimate the cost of work. Generally activities like ploughing, de weeding, requirement of plants/ saplings and tubers of selected species, bringing required plants from nearby tanks, cost of transportation, labour requirement for transplantation work etc., are included in the activities.

Out of 11, results of 6 tanks are shown in the graph. The results indicate rise in income for indigenous species only. This means it is the rise in net profit for the cooperative members, from 200 to 700%, as they don’t have to invest in stocking and feeding.

The habitat development activity has been carried out in 4 tanks in 2018. The habitat development failed in one tank owing to the presence of Tilapia, Oreochromis niloticus, a species known for its omnivorous nature. It feeds on phytoplankton, aquatic plants, and small fishes also. And, there is no natural controlling factor or enemy of this fish, which results in overpopulation of this fish, resulting in loss of aquatic habitat and fish diversity. Also, it adversely affects the growth of other fishes due to non-availability of food for them. This species is not permitted for rearing in open waters, as per the guidelines of Ministry of Agriculture, Government of India, but it was released by some trader, in the past, in the tank and now all other fishes are not yielding production and the indigenous species also vanishing from this tank. But the fishing society of Bampewada has this tank as the main source for livelihood and wanted to develop habitat in the tank. It is a perennial tank, thus, not dried up and the Tilapia remains in the tank destroying all the flora and fauna in this tank.

In tanks, where the plantation activity has been carried out, releasing of exotic fish species like Grass carp and Common carp is banned for initial 3 to 4 years. Later on, based on the vegetation cover, these species could be released, but in controlled and calculated manner for checking the over growth of vegetation. Same measures have also been followed in the reserved tanks for biodiversity conservation. The rearing of Rohu, Catla and Mrigal is going on in these tanks, as they are not a big threat to diversity.

The experiences from our work has contributed to evolve some management and planning of tanks. The major one was regarding extraction of Ipomoea fistulosa. The Ipomoea fistulosa extraction activity has been carried out at 5 sites by the joint efforts of women SHGs, fishing cooperative members and BMC members. This plant species is exotic and it covers the peripheral area of every water body, which is actually the area of local plant species in wetland area. These local plants are not only important for the aquatic life forms, but the peripheral plant species are also the source of fodder for livestock in the summer season.   It is a common belief that this plant cannot be eradicated by using human labour. Machines need to be used for the purpose. But, it has been observed by the local people that, at the places where poke lane machines were used, natural succession of local plant species is hampered. However, the community members decided to do it through shramdan (under MREGS) in the selected area of the water body. This initiative was also aimed at the prospect of including this activity under MREGS, so that Ipomoea is cleared on water bodies facilitating species diversity.

All the five tanks were monitored for two years. At places, where Ipomoea is dense, no other species was found on the ground, but where it is scattered, grasses like Vetiveria zizanoids or Oriza rufipogon were found. On the sites where the soil texture is loose, the plants were uprooted.

Out of the five sites, post monsoon study was carried out on four sites, as the other site was submerged and the depth of water restricted the access. Plots of 10 metre X 10 metre were measured for assessing the natural succession and rate of survival of Ipomea. Further, the 10 X 10 metre plots were divided into plots of 2.5 X 2.5 metres each to facilitate counting of the diverse species emerged. The count has been taken in the second also on same plots, to measure the results. The study indicated that biodiversity, indeed helps in better production of IMC as well.

The results have been shared with the line departments at different levels. It is clear from the study, that regular monitoring and extraction of Ipomoea is needed for at least 3 years. If done through MREGS, it also provides work for village communities besides conserving the freshwater biodiversity – a win-win situation for villagers and the biodiversity.

The wetland management plans for 12 reserved tanks has been prepared. There is a need to discuss with fishing cooperative societies and BMCs for implementation. Also, a people’s policy for biodiversity inclusive freshwater fishery at local level is needed.