Coconut is the crop of small and marginal farmers which is grown contiguously on their land holdings. Crop management is largely dependent on farmer to farmer extension as conventional extension system seldom looked into the contextual needs, need based delivery mechanisms for improving the efficacy of management in farmers gardens.

Black beetle, also termed as rhinoceros beetle owing to its horn like structure. is a major pest in coconut palms in all its growing stages.Rhinoceros beetle incidence in farmers field conditions is to the tune of 25 to 48 per cent in coconut seedlings and 23 per cent each in pre- bearing and bearing palms.The typical symptoms are the geometrical ‘V’ shaped cuttings in opened coconut fronds. The pest infestation results in loss of coconut seedlings and an yield loss of upto 10 percent in bearing palms. This calls for managing the pest over contiguous areas, involving community of farmers. Data indicated very low level of awareness and adoption regarding the bio control agents against the black beetle.

A participatory analysis with the communities, indicated that they prefer low cost, safer, environment friendly and bio-control practices to manage the pest, the reasons being as follows:

Several indigenous technologies were in existence and in practice among coconut farmers, since the crop and the black beetle are associated historically. The traditional practices like incorporating Clerodendroninfortunatum, a weed plant in cowdung pits, compost units and coirpith heaps which are the breeding sites of rhinoceros beetle, hooking the beetle using a metal hook, applying mixture of equal quantities of crystal salt, ash and sand in the top most leaf axils, three times a year, were commonly practiced with good results as indicated by old generation farmers.These are no more practised presently. A need based social experimentation to evolve an efficient, feasible and up-scalable  model of Area Wide Community Extension Approaches (AWCA) in bio-management of coconut rhinoceros beetle (Oryctes rhinoceros Linn.) was therefore designed by the Agriculture Extension scientists of ICAR Central Plantation Crops Research Institute (CPCRI).

Extension approaches for improving adoption of Green Muscardine Fungus (GMF) among coconut farmers was first initiated in 2007 in two panchayaths of Alappuzha district, but resulted in poor field responses and failure of FLP units. Hence in 2008, initiated Field Level Production (FLP) unit with a qualified person, but it did not sustain.An area wide campaign for treatment of breeding sites of the pest on 1500 ha was taken up, which proved to be time consuming and less efficient. Inadequate availability of bio agent and inability to achieve full coverage were the problems experienced. 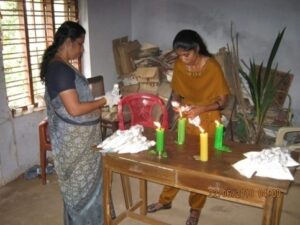 The three preliminary stages of the social process adopted were as follows:

I stage – Implementing participatory programme involving rural women farmers SHGs and  introducing them to the technologies on IPM of rhinoceros beetle by field based off campus programmes. Convincing them on the visibility of technology impact was necessary for building confidence and making them voluntarily participate in the process. They were involved in all stages of technology demonstrations in coconut farmers fields.

II stage – Evolving workable model of decentralized Farm level Metarhizium production (FLP) involving rural educated women farmers was attempted in dialogue with peoples representatives which was facilitated by the Agriculture officer of the panchayath. The most valuable  and critical contribution of the women SHG was the beautiful and simplerefinement of the low cost multiplication procedure through participatory analysis, cross learning and practical thought process as women.

III stage – Production /multiplication of GMF under the facilitation and supervision of ICAR – CPCRI scientists. The leadership and supportive role played by Agricultural officer, women leaders and local self government added value for sustainability of this social model.

The area wide participatory extension programme was pilot tested in Edava grama panchayath in Thiruvananthapuram district of Kerala state involving 5465 coconut farmers in an area of 520 ha having 110143 numbers of palms. Mrs. Thejaswi Bhai, Agricultural officer of Edava Grama Panchayath, who contributed tremendously as a  team, said‘Coconut is the nerve and steel of livelihood of this panchayath which was traditionally a coir village. The experience of being partnered in social research process with ICAR CPCRI make us proud and more knowledgeable in extension programme implementation. I can very confidently state that mutual learning and growing partnership with extension agencies elevate the efficiency and utilization of technologies developed in research institutions. The strong message of this participatory social research was that innovations are key to community development and women farmers are resourceful enough to refine technologies putting in simple modifications and thus contribute to faster and effective technology dissemination.’

Social mobilization and awareness campaigns were organised. Panchayath wide campaigns for the GMF treatment of cow dung pits, vermicompost units, coir pith, degraded coconut logs which are the breeding sites, could effectively bring down the population of the pest. Different stages of grubs will be infested by the fungus within a week of its application and adults after a little longer time. The fungus will not affect the earthworms in vermicompost in any way. The non availability of sufficient quantities of GMF coupled with low level of awareness of the technology among the farming communities were the major obstacles in the adoption. The green muscardine fungus production was decentralized through farm level GMF multiplication units made operational by trained  farm women groups. The capacity building and skill up gradation of the units was done as a continuous process of confidence building.

Approximately, 2000 hectares of coconut area in three panchayaths were brought under the process in Thekkekara, Devikulangara and Edava panchayaths of Alappuzha and Trivandrum districts. Two to three women Self Help Groups (SHG) members, extension officials of the respective panchayath, coconut farmers clusters of 8-10 members in each ward were involved in technology transfer activities and treatment of breeding sites. Thus, a total of 150-200women were mobilized to represent the panchayaths. This indicated that these technologies were very much women friendly, simple and adoptable.

Around 32 training programmes were organized for farmers and farm women. For midway corrections, video conference with experts was arranged. A low cost farm level GMF multiplication unit was set up by the women group for decentralized sustainable bio-input availability.

The initial cost of setting up of the unit is around Rs. 8000 – 10000/-.The basic items required are a pressure cooker (20 litres capacity), culture of Green Muscardine Fungus (GMF), Polypropylene covers, quality rice and other accessories like cotton, aluminum foil, thick candles, hand gloves etc. Ensuring hygienic conditions is the foremost requirement in farm level production (FLP) of the fungus. The application method is very simple.One packet (100g) of GMF is to be mixed with one litre of water and sprinkled over the cow dung pits, compost pits, decayed coconut logs etc. which are the breeding sites of rhinoceros beetles. The grubs die in 5-7 days.

While planning for area – wide community adoption programmes, all the potential breeding sites of rhinoceros beetles in each ward of the panchayath were mappedusing GPS. The scattered breeding sites of rhinoceros beetle in the panchayath like livestock farmers (643 nos), vermicompost units (7 nos), coir processing sites with coir pith heaps (3 nos) were mapped in panchayath indicative of the locations in each ward.It was found that 82 per cent of these potential/critical adopters were distributed in six wards. These sites were treated with GMF. It was a one week campaign with the active involvement of various stake holders. They were reached through coordinated efforts of peoples representatives, extension units of Department of Agriculture and Animal Husbandry, milk cooperative societies in which 85 per cent of livestock farmers are members and Women SHGs. Through this approach, more than 90 per cent of the potential adopters were reached within two months.Post intervention data indicated 75.8 per cent reduction in fresh pest infestation. Farmers revealed that grubs were infected by fungus after a week of treatment and infected grubs and beetles could be collected from all wards,  indicative of reduction of pest.

Regular feedback was being received. The participating farmers gave feedback that frequency of breeding sites treatment should be once in a year for better results instead of two years, which was approved by the experts on further examination.

The programme reached 70 – 80 per cent of the potentialadopters. There was reduction  in fresh incidence of rhinoceros beetle, especially in the bearing palms, by 75 per cent.

It was noted that knowledge of coconut farmers was higher in intervention area (i.e.Edava grama panchayath, Thiruvananthapuram district) compared to non-intervention area (control farmers inNeendakara grama panchayath, Kollam district). More than 90 per cent farmers of both areas could identify adult beetles and 50-60 per cent knew common breeding sites and symptoms of infestation.

Farm level production technology of GMF was refined by the group, reducing the cost of production by 40 per cent with 30 per cent reduction in time.

Technology package supported with appropriate extension mechanisms based on socio-economic situations and technical parameters, results in wide spread awareness and adoption and improved demand for technology.

With application of GMF, fresh incidence of rhinoceros beetle in the bearing palms, reduced by 75 per cent

The critical component of the extension approach was the decentralized option for technology facilitation viz. capacity building of women farmer groups as master trainers and farm level producers of GMF and targeting the ‘potential and critical adopters’ (ie. livestock farmers having cow dung pits, coir pith units associated with the coir processing and compost units in farmers fields) of the bio control technology. The non adoption of the technology by the potential or critical adopters, render the community level adoption of the technology by other coconut farmers ineffective.

The technology specific community extension interventions exert positive effect on the improvement of the knowledge of farming community irrespective of age, involvement and extent of farming systems practiced by the farmers. This leads to improved demand for technical knowledge for better output.

Even though livestock farmers are the potential adopters of the bio-control practices the community should know the associated bio management practices like leaf axil filling, mechanical destruction and prophylactic measures in positive impact creation, which was reflected in the relationship with extension contact and participation and mass media exposure.

Establishment of knowledge intensive area wide community based approaches to pest management and the utilization of integrated bio management technologies lead to acceptable solution to problem of pesticide misuse. AWCA proved to be not a passive process but involved interactions among and between stakeholders improving technology demand and utilization. Feedback and responses from extension officials indicated positive impact of spread to other farming communities also.

The focus on specific adopter categories and community extension approach in wider area could overcome the inefficiency of individual level technology adoption and wide variation of farmers’ socioeconomic resource base. However, it requires continued efforts and components for sustainability and acceptability among coconut farming communities. Thu, research inputs for converting the farm level production units to village level enterprises with attractive product and shelf life, technical supervision and facilitation for quality control is needed. Otherwise, the success and sustainability of the units will be limited and they remain short term.