LEISA INDIA > Articles > Issue Highlights > Celebrating 20 years of LEISA India – the context, the product, the process and the movement

It all started in 1998, when the concept of LEISA (Low External Input Sustainable Agriculture) was new and evolving in India. By distributing ILEIA Newsletter to around 1000 Indian readers, we made a small beginning in sharing experiences on safe and eco- friendly agriculture. After releasing a couple of Indian supplements, in the year 1999, we started publishing a full fledged Indian English edition  –  LEISA India. Its most satisfying to see that we could continue this service of knowledge exchange for two decades and still continuing….

Small scale farmers are deeply dependent on the environmental context they belong to. Farming is not just business for them. It is ‘a way of living’. Conventional high input agricultural practices are unsuitable, too risky and often out of reach for them. They cannot practice them as they do often impoverish them further by rapidly degrading the very natural resources which are lifelines for them – the soil, water and biodiversity. On the other hand, small farmers comfortably adopt alternatives which are context specific, relatable, simple, less risky, resilient and doable. They generally deal with upgrading the natural resource productivity, ecological balance and use of organic inputs. Practical knowledge on these alternatives is neither widely publicised nor easily accessible. Most often, the co-creation of knowledge is through local adaptations and innovation, and remains unnoticed. LEISA, currently popular as “agroecology” in  the  global  platforms  is  based  on  agro-ecological and  participatory  principles,  and  contributes  towards maintaining biological diversity on which the resilience of agricultural ecosystems depend.

LEISA India is all about celebrating this practical knowledge and benefitting from co-creating it, sharing it and using it for the benefit of all. All along, we believed that it is not just a publication but a knowledge exchange movement. We forged a consortium of like minded partners in 2000, initially consisting of GEAG, Kudumbam and Myrada to explore ways of strengthening knowledge building as well as sharing. The consortium in the later years further expanded to include organisations across India like ORRISSA, Kheti Virasat Mission, Yuva Rural Association and Mitramadhyama.

For more than two decades, LEISA  India  magazine has been inspiring those in similar contexts and having similar abilities, to emulate. It has been recognised as one of the primary sources of inspiration, a knowledge treasure on ecological agriculture by many individuals and agencies involved in development sector as well   as mainstream research and training. Currently, more than 9000 readers receive the English language edition through print copies and electronic copies. These readers include farmers and farmer organisations (11%), NGOs  (29%),  Academics  (22%),  Researchers (12%), Government staff (4%), students (5%) and others (17%).

In 2009, we spread out to two local language editions – Hindi and Kannada in collaboration with our consortium partners GEAG and Mitramadhyama. In 2010, we further  spread  to Telugu  and  Odiya  language editions in collaboration with our Odiya partner,  ORRISSA. We further spread our outreach in 2014 to Marathi and Punjabi readers with help of Yuva Rural Association and Khethi Virasat Mission. Starting from 3500 readers across all the languages in 2009, currently till end of 2019, more than 13400 readers receive all the language editions. Of the total readers who receive language editions, farmers and Farmer Organisations form the major chunk with 56%, followed by NGOs (23%).

While the English edition reaches the English literate target groups in India and a few south Asian countries, the language editions outreach is limited to the target groups in Karnataka, Andhra Pradesh, Tamil Nadu, Orissa, Uttarakhand and a few Hindi speaking States   in the North India, Maharashtra and Punjab. All the editions put together reach more than 22000 readers across the country. Besides the print edition, the digital edition and the social media have helped in reaching out to many more interested in ecological agriculture. On an average, there are more than 2000 visitors to the LEISA India website (www.leisaindia.org), every month.

Creating a platform for sharing field experiences and sustaining it for twenty years has never been easy. Themes for each quarter were chosen in collaboration with global network partners, balancing technical and social themes of contemporary importance. Moreover, the effort has been on highlighting multiple perspectives of a theme including the gender dimension. Often, identifying and sourcing articles which are ‘practice based’, that too on a specific theme, has been the biggest challenge. Lot   of efforts are made on contacts, networking with those willing to contribute within a specific time limit. Lots of efforts are put in through customary call for articles, web searching, networking for each issue of English edition.

Articles had to be sourced from those active in the field, reflecting deep insights and learnings on field realities and alternatives. It has to be written by practitioners who seldom write. Those active in the field, who are invariably busy and working in remote places, seldom had the ability to write. While some write very well, many times, a good experience remains hidden unless provoked to share how and why did it happen, when did it start, who were involved in various stages, the pit falls and challenges faced and how they were overcome etc. Developing the articles through didactic editing process through extensive interaction with authors has been the most challenging as well as a rewarding experience.   To get a holistic experience integrating technical community and human dimensions running into 36 pages of English edition on a specific theme is always  a precious baby! Recognising systematic documentation as a crucial necessity for sharing field experiences, in early 2000, LEISA India team successfully guided the consortium for two years on systematic documentation and knowledge management.

Working through consortium model of production (English and language editions – 28 issues per year) requires good strategic and effective coordination. With extensive commitment from partners, coordination with seven multilingual partners all over India on selection, production, translation, copy editing, distribution of each translated edition, is done. Partners in each region ensure that translation is well done with peer reviewing by another translator. The overall stylistic consistency is maintained while having the local flavour for each edition. The most satisfying is the consortium model of production which is based on shared ownership, mutual respect and collective pride besides good management practices.

Management of digital editions on the web; sending of e-magazine of English edition, correspondence for all the editions based on common style standards; coordinating Facebook and social media with web consultants; fund raising efforts for co-finances are some of the critical and interesting processes behind the regular production of the magazine. Also, regular maintenance of the diverse databases including subscriber, contributor, survey responses, voluntary contributions database, for timely reporting, analysis sets very good benchmark for timeliness and effectiveness.

As the old adage goes, “The proof of pudding is in the eating”, we have always been keen on knowing the usefulness of the magazine to our readers. The regular surveys done during 2009, 2013, 2016 and 2020 along with impact study done through a combination of strategies like individual interactions, group discussions, field visits, including the analysis done through outcome mapping tool developed by IDRC, revealed very satisfying results.

The responses and feedback  was  overwhelming.  With more than 98% of the readers finding the magazine interesting,  it  was  evident  that  the magazine remains the primary and for a vast majority, the only source     of practical knowledge on alternative agriculture. Respondents indicated using the magazine for various purposes like field application; training and teaching   in agricultural programmes. While farmers used the content for field application; NGOs, for training and guiding eco alternatives; Researchers and Academics for awareness on participatory approaches, practical experiences on ecological alternatives and curriculum development; Mass Media for using and developing AIR and TV programmes on alternative agriculture, Financial institutions for creating awareness  among  the farmers; Analysts for policy advocacy by citing credible evidences from the field. The magazine became an important torch bearer for alternatives like SRI, IFS, FPOs, traditional ecological and organic alternatives, farmer led institutional models and social processes.

What emerged as a surprise was that majority of the readers did not limit themselves to reading but also shared the content widely with others – farmers with other farmer friends in their own farmer and NGO networks, as well as individual enthusiasts sharing with many more. For instance, one teacher influencing more than 1000 farmers in Orissa! However, one is humbled by the enormity of the task of reaching the still unreached in a country with diverse languages and a huge rural  population dependent on farming for livelihoods.

LEISA India, a member of global Agricultures Network, has been part of international deliberations and exchanges in partnership with partners in Latin America, Brazil, Africa, Asia and Europe in promoting agroecology (See box). These are globally well known partners rooted in agroecological practice, guiding half a million farmers, for more than 3 decades. Together, they have been co-creating and sharing agroecological knowledge throughmagazinesand websites, for more than 2 decades (AME Foundation, India; ASPTA, Brazil; Agridape, West Africa, ETC- Andes in Latin America; ILEIA, Netherlands). 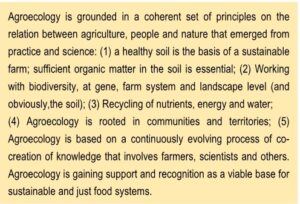 LEISA India has spearheaded significantly several themes and movements  like  SRI,  International Year  of Family Farming etc. LEISA India team, besides magazine production has been involved in a number of activities, like LEISA enthusiasts meets, which provided opportunities for face to face interactions with the readers. It has spearheaded long and short duration knowledge management programmes for civil societies in India and South Asia. As coordinating member of the Family Farming movement, facilitated stakeholder workshops and working groups at national and international level. Also, LEISA India team of AME Foundation, on its own and in collaboration with ILEIA, guided several national and international documentation initiatives with international partners like MISEREOR, Caritas, as well as FAO. LEISA India programme has also brought out several products like calendars and posters to popularise LEISA  Movement.

A small programme has thus transformed into a movement, ably supported by DGIS (through ILEIA for 2 decades), IDRC for one year, and MISEREOR since 2014. The Voluntary contributions from our readers, though small mean a lot to us in keeping the momentum going. LEISA India is what it is today because of commitment and enthusiasm of all our readers and authors who have been supporting the magazine  as well as promoting wider sharing, thus strengthening an alternative paradigm of agroecological movement.

This special issue is brought out to celebrate two decades of knowledge sharing on agroecology. This issue includes some of the best articles published earlier in LEISA India, encompassing various dimensions and perspectives on agroecology. We are  forever  grateful to those small farmers who have been relentlessly practising ecological agricultural methods inspiring many to follow and to all those authors without whom sharing such experiences would not have been possible. Hope you find this special issue interesting.