Jharkhand farmers are showing increased awareness and responsibility towards efficient production systems as well as farm sustainability. With the support of ICAR scientists, farmers in Phusri village are reaping multiple benefits by reforming degraded mining lands into productive farm lands.

Plant is the basic unit of agriculture. Individual plant lies in the centre of all endeavours and activities in the field of agriculture. The output of each and every input is expected to manifest itself in form of a healthy, robust and productive plant, be it a mushroom or a mango tree. All consequences of agricultural policies, technologies and innovations have to emanate from a single plant. That is why it is the individual plant which is the target of the entire range of farming activities. The civilization lives by the traits possessed by plants. Our diverse needs are met by the diverse kinds of plants we have around us. Diversity of flora contributes to the prosperity of a society and also determines the amount of self-dependence it can attain. For example, more diverse the kinds of microbes in the soil, higher the fertility and biological activity in the soil. Diversity of products that we can have is directly proportional to the diversity of flora and fauna in our ecosystem.

Plant diversity and their products are source of livelihood for forest dwellers and many village communities all over the world. Farmers at grass-root level have been maintaining homestead gardens which serve as a reservoir as well as cauldron of diversity. Homestead gardening is an important source of nutritional security at household level for rural poor with no capability to afford fruits from the markets. In addition to generating employment in rural hinter lands, they have come to hold a significant place in agrarian economy.

Women folk in rural areas are struggling to augment their income with limited options available in their socio-economic space. They are moving towards non-chemical methods. For instance, women in Palkot block of Gumla District of Jharkhand had produced imitable example in the field of plant protection by application of cultural practices and organic methods. Incidence of fruit flies in mango orchard was successfully managed by use of paper envelops to cover the developing fruits and use of pheromone traps viz., Methyl eugenol instead of toxic pesticides since 2012. This technology has been adopted now in more than 1000 ha of mango orchards.

Mine lands to productive lands

The State of Jharkhand has more than 180 coal mines. After years of mining, the land is rendered unsuitable for any use in general and agricultural use in particular. There are thousands of hectares of such lands waiting to be reclaimed.

Phusri is a tribal village situated near Charhi, Mandu, Ramgarh in Jharkhand. Quarrying and selling of raw coal to the nearest market has been the only livelihood option for these tribal households. In the lands they own they have been cultivating rainfed lowland paddy during Kharif. Water gets collected in the abandoned mining pits during monsoons, which is used for washing and bathing, besides irrigating some crops. The pits get dried up after March. The village has very few trees too. Infact, only one tree each of mango, guava, mahua and a grove of sal (Shorea robusta) trees was seen in the village.

Considering the deteriorated condition of the soil, some soil and water conservation measures (viz., construction of plastic lined dobhas, full moon terracing, half moon terracing, staggered contour trenching, mulching, etc.) were designed and applied for improvement of the site. Pattern of changes in soil moisture content in both the conditions under full moon and half moon terracing conservation measures for the plantation during extreme summer was recorded on daily basis to determine optimum irrigation requirement. In the beginning of the project (2014) it was observed that after 24 hours of irrigation, the soil moisture content went down to approximately 6 – 8% and then gradually declined over the weeks. By 2018, water holding capacity of the soil improved remarkably, i.e., it takes more than 72 hours after irrigation for the soil moisture content to come down to 6 – 8%. This can be attributed to decomposition of crop residues leading to build up of organic matter, increase of microbial population and consequently their activity. The soil bulk density has decreased from 2.3 g cm-3 to 1.1 g cm-3, whereas, available organic carbon content has increased from 0.23% to 0.58%. The soil pH and EC values have also shown an increase.

Fruit plants like mango, guava, lemon, bael (Aegle marmelos), etc. are generally more susceptible to both biotic and abiotic stress as compared to forest trees based multipurpose species viz., Bakain (Melia azedarach), Mahogony (Swietenia mahagoni), Shisham (Dalbergia sissoo), etc. Increased incidences of pest and diseases had been reported which had been ascribed to situation arising out of changed climate. Technologies like full moon terracing, half moon terracing, staggered contour trenching, mulching resulted in reduction of plant mortality. For example, under extreme dry spells, the plants grown at coal mine affected area respond differently to moisture regime and scheduling need may vary from species to species.

To help farmers grow some vegetables, both for nutrition and income purposes, the project promoted vegetable cultivation. Villagers were not growing vegetables before and they were not aware of the ways of growing vegetables. Various trainings were therefore designed and conducted which covered a number of topics like cultural practices like nursery raising, planting techniques, pruning, thinning, weeding, mulching, plant protection etc. and several technologies related to soil and water conservation measures. The trainings were imparted during 2016-17 by experts of ICAR-RCER at KVK, Mandu. These were supplemented by need based on-farm demonstrations and field trainings too. The activities were closely followed up with the help of the staff of KVK, Mandu.

Diversity is the engine of sustainability

Vast tracts of barren lands have been brought into cultivation. For the first time in Kharif 2019, the erstwhile mine lands were used for raising paddy nurseries, which were transplanted in rain-fed lowlands. Farmers are now producing fruits, vegetables, food grains, fuel wood, fodder, etc. All these have resulted in a number of benefits in terms of income, nutrition, fodder availability, and better employment opportunities. 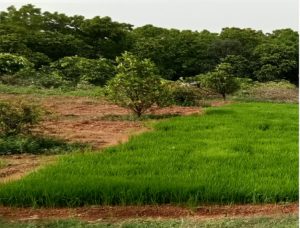 Farmers received net returns of Rs. 42683/- per hectare from rainy season crops (like tomato, chilli and cucurbits) and Rs. 18293/- per hectare from winter crops (like mustard, groundnut, chickpea, arhar, cabbage, cauliflower and potato). Survey revealed that proportions of the vegetables and fruits being sold in the market are roughly 60.25% and 22.34% of the total production, respectively. Entire mustard produced was sold in the market. Households were able to obtain a marketable surplus of cowpea.

The impact on nutritional status of the community was obvious and tangible. The vegetable intake of family (4 members) increased by approximately 30% due to vegetable cultivation. Also, the entire pigeonpea produced was consumed by households, improving their protein nutrition.

The reclaimed land also served as a good source of fodder for animals. Introduction of fodder species has become a major support for livestock farmers since their animals like cattle, goats and buffaloes mainly sustain on open grazing in lean months.  Bakain (Melia azedarach), a multipurpose tree grown as intercrop in field crops and kans grass (Saccharum spontaneum) were grown as fodder as intercrop between fruit trees and forest tree species where as Bhoomi sudha (Tephrosia candida) was grown as a multipurpose species serving as green manure, fodder as well as hedge. These fodder crops yielded around 628.05 kg per hectare. Green fodder which in addition to roughage, supply good amount of many vitamins, protein and mineral nutrients to cattle and goats.

As a result of these efforts, lot of employment opportunities have been generated because of increased agricultural and forestry activities in the area. This further has reduced labour migration from the region.

Impact on environment and biodiversity

By promoting crop cultivation, there is a change in the soil and environmental condition observed. Soil ecosystem is becoming normal. Growing plants over such land have positive impacts that led to increase in floral and faunal biodiversity. Introduction of various soil and water conservation measures like Dobha, full moon and half moon terraces, staggered contour trenching, mulching and zero tillage cultivation practices have led to establishment of vegetation, the root mass of which has had a binding effect on soil consequently checking the soil erosion to a great extent. The rate of erosion measured as peak sediment discharge (concentration) reduced from 232 g m-3 to 181 g m-3. Because of mulching with dried vegetation, decomposition of fallen leaves and dead root mass, and agricultural activities, the microbial population as well as their activities increased. The diversity of weeds species also increased from 7 in 2014 to 18 in 2017. Shanon index, a measure of weed diversity, increased from 0.34 to 0.79 in this period. Grey patches of lands are turning green. A concurrent increase in diversity of wild fauna like birds, honey bees, wild boars, reptiles, etc. have been observed.

The project interventions have had a positive impact of availability of nutrition, spread of education, social stability, and employment opportunity for rural folk including women. Farmers are showing increased awareness and responsibility towards efficient production systems as well as farm sustainability. Scientists are engaged in developing climate smart technologies. It is time for the government to formulate policies which encourage the efforts of farmers and are supportive to the implementation of technologies developed by research institutions. Since plant is the unit of production, farmers, scientists, industries and policy makers have to work in tandem to make sure that every single plant gets most congenial environment to give its potential production.