Murugesan aged 40, lives in Gotlumarampatti village of Pennagaram taluk in Tamil Nadu. Eight years ago he bought 4 acres of land. Of this, only one-fifth of the area has access to irrigation through open well. 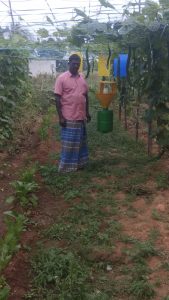 Murugesan grows diversified crops on his land – groundnut on one acre and ragi and samai on half an acre each.  He has divided the remaining 2 acres into four parts and grows vegetables like ridge gourd (0.5acre), snake gourd (0.5acre), bitter gourd (0.5acre) and a mix of black gram and green gram.

He cultivates these vegetables in broad bed and furrow system maintaining 8 feet width of beds and dibbling the gourd seeds at 4 feet distance over ridges. This system requires frequent irrigation to wet the soil profile. Providing irrigation being a challenge, he had to manage vegetable crops with prolonged moisture stress. He could not go in for drip and sprinkler irrigation systems, owing to its high cost. Prolonged moisture stress resulted in delayed and stunted growth leading to weak stems, low flowering and weak fruits. He also spent high in fertilizer application to these vegetable as he followed generally the broadcasting method which is the customary practice of other vegetable farmers too.

Murugesan had an opportunity of participating in a Farmer Field School organized by AME Foundation during 2015. During one of the sessions, he understood the importance of applying enriched FYM with bio inputs such as Trichoderma, Azospirillum, Rhyzobium, Phosphobacteria to the root zone of groundnut in improving water retention capacity of soil particles.  This triggered an innovative idea. Murugesan wanted to try pit method of cultivation, using enriched FYM.

Instead of dibbling seeds, which was the usual practice, Murugesan  made pits of 1’x1’x1’ in 1.5 acres, at a distance on 4 feet in a row. The spacing between ridges was reduced from 8 feet to 5 feet. Meanwhile he prepared enriched FYM using the bioinputs. For 300 kgs of FYM he added one kilogram each of  Rhyzobium, Azospirillum and Phosphobacteria and half kilogram of Trichoderma. The heap was mixed well, water was sprinkled and covered with moist gunny sacks and kept for aerobic decomposition for about 20-25 days. This decomposed mixture was used to fill the pits upto 3/4th level from the bottom and the top was filled with excavated soil. Around 1-2 seeds of gourds were sown in each pit. He also created one foot mini irrigational channel in already existing channels, at a distance of one feet, which enabled water to reach the pits directly, avoiding unnecessary wetting of other area. He applied vermicompost once in 15 days and totally avoided chemical fertilisers.

With this method, Murugesan reaped very good results. The use of EFYM helped in retaining moisture better, almost storing 5 times more than the normal soil. This way he got a phenomenal growth and establishment of vegetable crops from each pit. He also observed that the crop had vigorous growth, stems had more girth, rooting was better with high root mass, flowering was more and the plants bore bigger fruits. More importantly, there was extended flowering and crop life cycle. There was good saving on water as he could reduce the irrigation frequency from alternate days to once or twice a week.

By adopting this method, Murugesan could get better yields. Also the harvested crop was of good quality. The vegetables had a fresh and healthy appearance which fetched him better  price in the market. More importantly his vegetables created high demand from various merchants with better price.

Mr. Murugesan can be contacted at Door no. 2/300, Gotlumarampatti, Bikampatti post

The writeup has been developed by Mr. J Krishnan, AMEF. He can be contacted at krish72oxigen@gmail.com